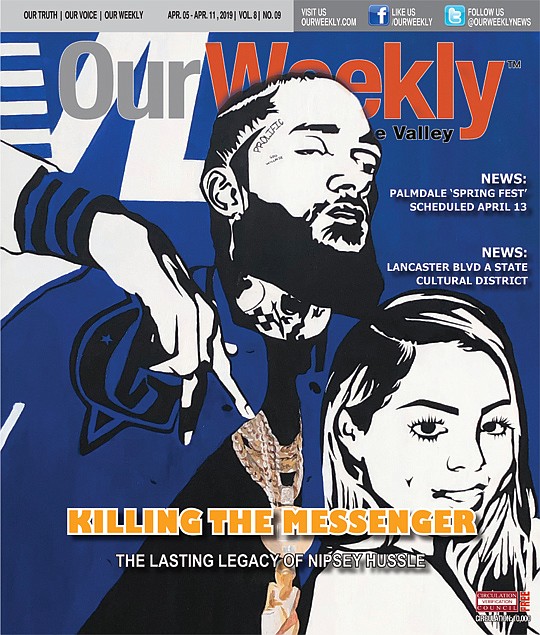 On Sunday, March 31, Sh*tty Cuz returned to the Marathon Clothing Company, presumably topresent his paperwork and patch things up. Words were exchanged, and the angry party walked to a car where he apparently retrieved a firearm. At 3:25 p.m., shots were fired, striking Hussle and two others, while the shooter, later identified as Eric Holder, escaped in a white compact car. Hussle was pronounced dead at the California Hospital Medical Center.

“…he was up to something GOOD and the system didn’t want that.” -Anonymous Instagram posting, dated April 1, 2019

Eventually the man’s given name of Eric Holder was revealed, and he was apprehended on Tuesday afternoon in Bellflower by the L.A. Sheriff’s deputies, who turned him over to the LAPD. He was then transported to the 77th Street Police Division under escort via police caravan with helicopters overhead. The actual murder was merely the beginning. On the night of the homicide, the family of holder was directly impacted by his actions. Street gossip suggests anyone connected to Holder is in danger.

Almost immediately, a vigil in his honor was set up at the intersection of Crenshaw and Slauson, an old bank trunk he’d converted into an armored car parked in front of his store. By the following evening, a rambunctious crowd numbering in the hundreds turned the gathering into a chaotic mess. More than a dozen people were trampled on and transported to the hospital as the mob threw candles and other debris at police attempting to clear the area. If nothing else, the fracas confirmed the area’s love for the rapper.

More then a rapper, Nipsey Hussle was a guiding light in the City of Angels and a mentor to many, beginning his career by slinging CDs from the trunk of his car. Among the youngsters he recruited to distribute his CDs was young DeJon Johnson, a fellow resident of 59th Street and Fifth Avenue. Johnson remembers him as a quiet force who moved through the neighborhood with “…integrity and principles.” In one memorable incident, Johnson faced off with a much older adult who’d sullied the honor of his sister, when Hussle “…came out of nowhere, like Superman,” to intervene. The other man retreated due to the “aura of respect” that Hussle projected.

The example his elder set followed Johnson in his sojourn back east to complete his education. Throughout the challenges of academic and financial difficulty, he remembered the paradigm set by his mentor to stay the course, and finally earned a Master’s degree from the University of Delaware to become a software engineer.

“I would not be the man I am, or have the perspective on life that I have if not for Nipsey,” he says. Another Angelino, who did not know Nipsey Hussle personally, yet fell under his sway of optimism none the less, was an aspiring visual artist from Nipsey’s neighborhood, Demi Lauren. This mantra of perseverance guided her through high school and across the country to Washington, D.C.’s Howard University. As a tribute to her personal and artistic muse, she began a painting depicting the rap idol and his wife, the actress Lauren London. Artist and rapper connected via internet, and arrangements were made for him to view the work, postponed by his attendance at the Grammy Award ceremony. He never saw the actual painting. Lauren will present an exhibition of her work, including her portrait of Nipsey Hussle, at Earle’s Grille, 3864 Crenshaw Blvd, in Los Angeles, on April 20 from 1 to 4 p.m. In the mean time, it can be viewed at her Instagram account @_demilauren.