The word “Black” is examined from four dissimilar viewpoints 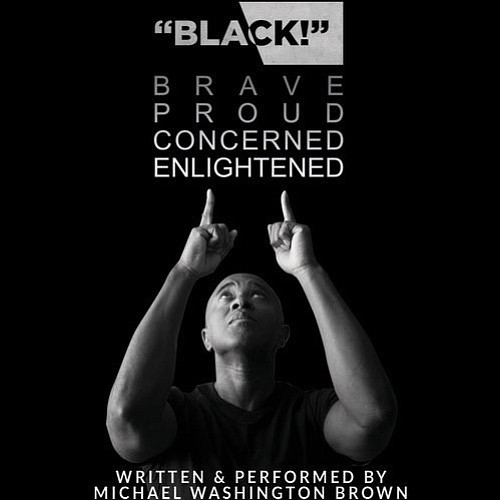 “Diaspora” is a term originally coined as a reference to the

descendents of Israel scattered throughout the globe, then applied to

became fashionable towards the end of the 20th century, and gained

popularity with the advent of the millennium.

the circumstances of his birth and his lineage compelled him to

outside the continent (defined by the African Union)…” Born in England

of Barbadian (his mother) and Jamaican (his father) heritage, his

were not being told.”

The result is his one-man show, titled provocatively “Black.” In it,

American--to tell their own personal, alternately similar and

contrasting perspectives of living Black (informed by Brown’s own,

Theatre, the production comes Los Angeles after successful runs in

before, including commentary on the Willie Lynch manifesto, the self

destructive penchant of the “hip hop” generation to refer to each

light- and dark-skinned elements of the race.

hundreds of millions of descendents of the Dark Continent scattered

across the world into one neat, convenient cluster. Even the most

casual observer of the ongoing ethnic (and racial) melodrama within

this particular city knows about the schism, cultural, political, and

inhabit West L.A. and environs along the coast.

origin are brought into the mix. As Brown notes:

“…not all of us are African-American, and we don’t all share the same

As presented at the Zephyr, this is a bare bones affair in which Brown

utilizes a chair, incidental music, and projected graphics to drive

his point home. He is a compelling performer but it is occasionally

between the four separate guises.

“Black” is being presented every Sunday at 7 p.m. through Oct. 14 at