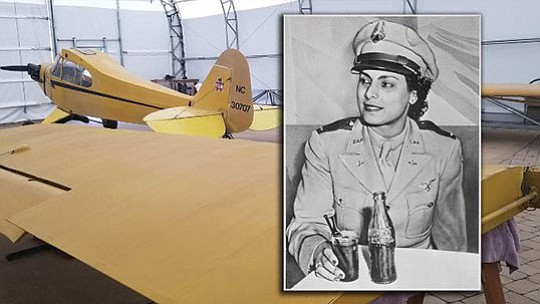 Board members at Aviation Heritage Park (AHP) have taken the first step toward the restoration of a 1940 Piper Cub, which will honor a Black female pilot. The plane made its way from the airport to the restoration tent at the park Monday, reports WBKO. Jerry Roark, for whom the restoration tent is named, said this Piper Cub will honor Willa Brown, a native of Glasgow, Kentucky. “She not only got her pilot's license, she got her instructor's license and her commercial license,” he explained. Brown is known as the first African-American woman to obtain her commercial flying license. “Back in the 1930s and ‘40s, it was almost impossible for a Black woman to be able to do that in the United States,” Roark explained. The Piper Cub is a lightweight aircraft that weighs about 600 pounds, including the engine. Its on-board instruments are manual, and nothing is electrical. “A lot of people cut their teeth and learned to fly in a Piper Cub,” Roark added. Although the Piper Cub is not known for combat action like the several other aircraft at AHP, Willa Brown did play a small role in the history of military aviation. Brown and her husband started training some of the Black aviators that later became part of the Tuskegee Airmen. The Piper Cub was used mostly for sport or recreation, and almost always the same color. This one is no exception. The yellow color that the plane is now will echo the final product. Board members hope to have the Piper Cub restored before the AHP Hangar Party next June. The restoration of the plane begins just weeks before AHP is to begin turning dirt for their area’s new multi-million dollar museum. “The AHP Board of Directors has envisioned a permanent museum on the site for several years and on October 11, we will take the first steps towards turning that vision into reality," said AHP President Joe Tinius. Phase one of construction in October will include grading and site work, as well as constructing a storage building, pouring a concrete slab for the restoration facility, and the beginnings of utilities.