30th Anniversary of 'Just Do It' campaign 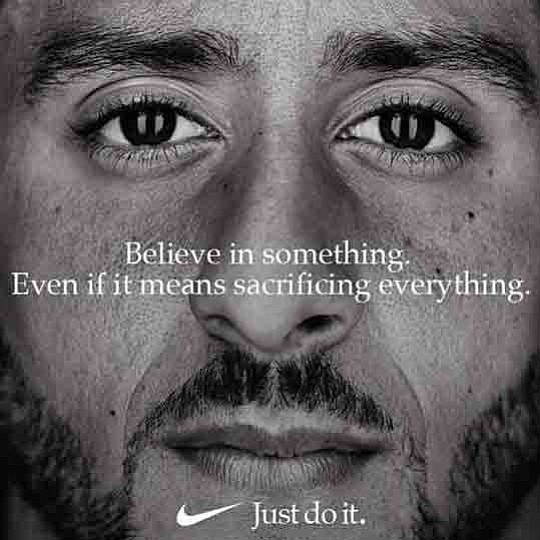 Kaepernick launched a nationwide movement when he started kneeling during the national anthem to protest police violence. Kaepernick has effectively been blackballed from the NFL and has been without a team for almost two years, in spite of being a top-level quarterback.

President Donald Trump seized upon the protest by branding the players who kneel unpatriotic and calling for their termination. Nike’s new campaign was bound to be controversial, and it has already seen protests. Recently some anti-Kaepernick people have taken to social media to post images and videos of them burning Nike merchandise.

“Nike never abandoned Kap and he's remained in their staple of athletes they have supported. This was just a continuation of their support and its belief in his right to dissent, protest, and exercise his right to free expression. The company has issued statements reiterating that belief,” said Hutchinson.

Hutchinson is a long-time campaigner against police violence in minority communities.

“He (Kaepernick) supported me and others who have been fighting for years against police abuse and for racial justice,” said Hutchinson.

Kaepernick and Nike are getting support from many quarters.

“As a decorated U.S. Army combat veteran and veteran political campaign professional, I applaud Nike's new campaign with Colin Kaepernick,” said Chuck Tyler, CEO of SMART Politics.  “This campaign moves beyond controversy and shock value, and attends to core values that I learned while in uniform. Duty to community is evident here, as well as the recognition of personal courage.”

Nike’s new ad strategy does come with some risk. Apart from alienating some customers, the company’s stocked also briefly dipped yesterday. Actor James Wood said he dumped his stock and urged others to follow him.

But the controversy also generated a lot of attention. Even the people burning their merchandise generated exposure.

According to the Apex Marketing Group, the Kaepernick “Just Do It” campaign generated about $43 million in media exposure in less than 24 hours.

“Nike is perhaps the best brand to have made this move because taking a stand and supporting athletes is in the company’s DNA. As they have shown with their support of Tiger Woods, Kobe Bryant, etc., they typically don’t make knee-jerk decisions,” he said. “This move with Kaepernick is a calculated risk, but one that Nike is obviously willing to take and the timing (with the start of the NFL season looming) is not coincidental. They are welcoming the spotlight that has come as a result of this move.”

Lobring added that in today’s environment, many companies are taking bold stances on political and social issues.

“It’s obvious that we are living in a hyper-political environment, and we are seeing that reflected in the current advertising/marketing landscape,” said Lobring. “With Levi’s also announcing its gun control initiative yesterday, I think it’s a trend that is likely to continue – that is big brands taking a stand on issues that they believe/support. The immediate reaction from consumers is always a concern, but it’s the long-term trends that will shine the most light on the impact of campaigns such as these.”