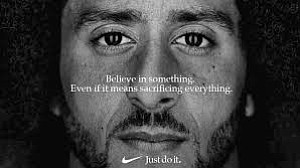 When Nike announced that former NFL QB Colin Kaepernick would be the face of its new “Just Do It” ads, some police organizations responding by condemning Nike’s move. But for at least one police organization, Kaepernick’s role in the Nike campaign is a welcome development. According to numerous news sources, the National Black Police Association released a letter this week that defends the athlete and argues that police officers hold a diverse range of attitudes about the NFL protests that Kaepernick has come to symbolize. “The NBPA believes that Mr. Kaepernick’s stance is in direct alignment with what law enforcement stands for — the protection of a people, their human rights, their dignity, their safety and their rights as American citizens,” the group wrote in a letter to Nike Chairman and CEO Mark Parker. The new Nike ad, which made its official debut during the first game of the 2018NFL season on Thursday night (Sept. 6), includes apparel and merchandise. It has reignited the ongoing controversy Kaepernick started two years ago when he kneeled during the National Anthem in protest of police brutality against people of color. Most police unions have emerged as particularly strong critics of Kaepernick, regularly raising the argument that the kneeling protest is disrespectful to the military and law enforcement. It seems most people are unaware that the U.S. Supreme Court ruled decades ago that people are not required to stand during the National Anthem or Pledge of Allegiance.