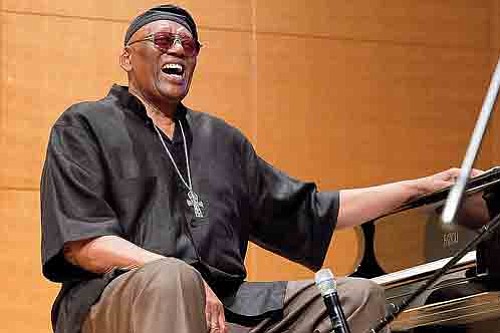 Randy Weston, the New York pianist who celebrated and reinforced jazz music’s roots to the African continent, died at his Brooklyn home on Sept. 1. He was 92.

“He died like a leaf falling off the tree,” reported Ayuko Babu, executive director of the Pan African Film Festival (PAFF), who had a long and fruitful association with Weston going back decades.

Weston had just returned from performing in Europe and left a message on Babu’s answering machine.  Before he could return the call, word came that this seminal musician had died. His family reported that the venerated keyboardist woke up on Saturday, donned a robe and sandals, and went to sit in his favorite chair before slipping away peacefully.

“We all should go that way,” Babu suggests.

Randolph Edward Weston was born in the same Brooklyn borough he left the world in on April 6, 1926. His father, a Panamanian barber, restaurateur, and impassioned follower of Marcus Garvey, instilled his son with a pride of heritage, and set him on the musical odyssey that would last a lifetime. Young Weston was a giant at 6’ 7” inches, and a natural for the game of basketball then gaining popularity in World War 2 era New York. His father however, would not let him go out until he’d practiced at the piano before the large picture window in the family home, direction he would be forever grateful for.

“Don’t let kids do what they wanna do,” he later shared with Babu.

“You gotta guide them!”

Starting his career in post war New York, Weston was an influential force throughout the globe. A major component in America’s diplomatic outreach, he performed in State Department sponsored tours of Africa, and established a successful jazz club in Tangier, Morocco, circa 1967-72. His patronage of the African musical bond with America continued with a 1977 “Festival of Arts and Culture,” in tandem with Stevie Wonder and other stars from 60 different cultures, drawing crowds of 20,000 plus in Lagos, Nigeria, in spite of lackluster coverage by the western press.

Leimert Park’s Eso Won Books, a cultural and intellectual hub of the city’s Afrocentric community, held a book signing in 2011 for the newly released “African Rhythms,” Weston’s autobiography with co-author Willard Jenkins. Its owner, James Fugate, remembers getting into the maestro’s output on Verve Records in the mid to late 1980s (“Spirits of Our Ancestors”), after being turned off by the overtly commercial offerings on CTI (Creed Taylor Incorporated). Within the next few weeks, he hopes to mount a discussion of the pianist’s work with Babu and UCLA history professor Robin Kelley. For further developments, check with the book store website (https://www.esowonbookstore.com/).

Weston was a major inspiration for the 1992 launch of PAFF, Babu remembers. He credits Weston with showing the artistic community to be viable without resorting to “selling out.”

For more information on this seminal musician, go to his official website at http://www.randyweston.info/.