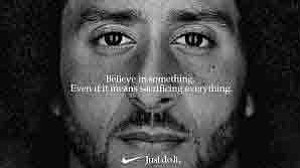 A Republican official in Pennsylvania has resigned after it emerged she called Black NFL players protesting the national anthem “baboons” in a Facebook rant, reports the Independent. This comes about the same time Nike releases ads featuring Colin Kaepernick that drew protest from some people. in 2016, Kaepernick initiated the protests from NFL players by kneeling during the national anthem that have drawn criticism from President Donald Trump, while being supported by white players as well as Black players, such as Green Bay Packers QB Aaron Rodgers, who is now the highest paid player in the NFL with a new $134 million contract. Carla Maloney, who was secretary of the GOP’s Beaver County branch, apologized for the series of posts she made on the social network last year. Although it is unclear exactly when the comments were made, they appeared to be in reaction to players kneeling in protest as the national anthem played before NFL games. In one post, Maloney described American footballers taking part in the gesture to protest cases of police brutality in the U.S. as “over paid ignorant Blacks,” suggesting they should “go to Africa.” When another user commented: “Go Steelers,” in reference to the Pittsburgh Steelers NFL franchise, the GOP activist launched into another racially charged tirade. “Steelers are now just as bad as the rest of the over paid baboons. You respect your flag, country and our national anthem (sic),” she wrote. “Stop watching, or going to a game and paying for over priced food, water and tickets. Let’s see how the baboons get paid when white people stop paying their salaries.” The Beaver County Republican Committee said in a statement that it had accepted Maloney's resignations from both of her roles in the party and denounced her comments. “The views expressed in her posts are abhorrent and have no place in reasonable public discourse,” the committee said. Since 2016, hundreds of players have refused to observe the anthem at football games and in a variety of other U.S. sports. From the beginning of the 2018 NFL season, due to start on Thursday, players will be required by league rules to observe the anthem on the field or stay in the dressing room. In her resignation statement, Maloney apologized for her remarks about the protests, which she said had been “in poor taste. I apologize for my distasteful, inappropriate and insensitive social media posts. Those that know me know that I come from a diverse family that represents modern America.”