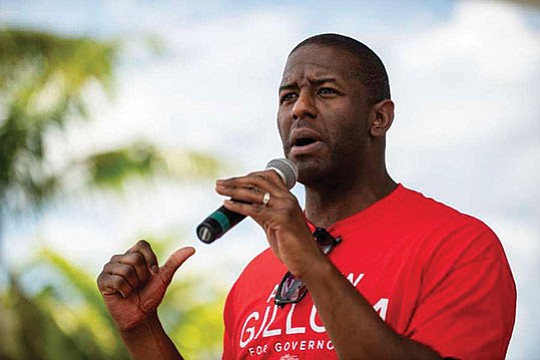 As the November elections approach, it seems more and more ads have candidates attacking each other rather than discussing the issues. Florida’s race for governor has been particularly ugly, with the Republican candidate making racial innuendos toward his Black opponent. Now the race has become even more contentious, with reports coming out that Andrew Gillum, the Black candidate, was targeted by new racist robocalls, reports NBC News and AOL. The racist robocall that refers to Andrew Gillum as a “negro” and a “monkey” is making the rounds in Florida, prompting a furious response from the Democratic gubernatorial candidate's campaign. Florida voters who receive the call — audio of which was obtained by NBC News — hear a man impersonating the African-American politician. “Well hello there. I is the Negro Andrew Gillum and I'll be askin' you to make me governor of this here state of Florida,” the voice says. “My state opponent, who done call me monkey, is doin' a lot of hollerin' about how 'spensive my plans for health care be,” the voice says. A chimpanzee noise is played during the word “monkey.” A spokesperson for Gillum's campaign blasted the robocall as “disgusting” and “abhorrent.” “These disgusting, abhorrent robocalls represent a continuation of the ugliest, most divisive campaign in Florida's history,” Gillum spokesman Geoff Burgan said in a statement. “We would hope that these calls, and the dangerous people who are behind them, are not given any more attention than they already have been.” Gillum, the Democratic mayor of Tallahassee, is running to become Florida’s first Black governor. He is running against Republican Ron DeSantis. A spokesperson for the DeSantis campaign did not immediately respond to questions from NBC News about the robocall. It was not immediately clear who paid for it. The message, however, is not the first to target Gillum with derogatory and offensive language. In August, a white supremacist group ran telephone robocalls in Florida impersonating Gillum as well.