‘So Tall Within’ provides children valuable lesson in seizing ‘freedom’ 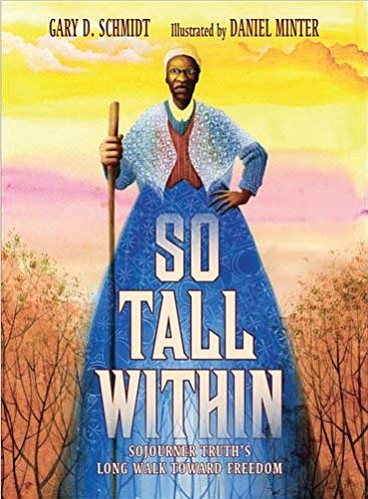 That’s what Mom said when you wanted her to take you somewhere this summer. What’s wrong with your feet, she asked, are your shoes broken?  So you hoofed it everywhere, and that’s what changed your summer. In the new book “So Tall Within” by Gary D. Schmidt, illustrated by Daniel Minter (2018, Roaring Book Press), walking changed the world.

When Isabella was small, her mother, Mau-mau Bett, took her outside to see the stars and the moon. Mau-mau Bett said that what Isabella saw in the sky were the same things her brothers and sisters could see and that comforted Isabella. She couldn’t remember her brothers and sisters. There were “ten or twelve” of them, and they’d been sold as slaves when she was just a baby.

At nine years old, Isabella was sold away from Mau-mau Bett, along with a small flock of sheep. She had the stars and the moon to comfort her but, though it hurt to be away from her mother, Isabella was kept so busy that she scarcely had a chance to think about it. She worked first for this family, then for that man, and another until she was forced to marry a slave named Thomas and have children of her own.

She sometimes wondered if they, and their children would also be slaves someday. Once, she’d asked God if that was “right.”

And then came the day when a promise was broken and Isabella had enough. She grabbed her baby daughter and she “seized Freedom with her own hands,” escaping to the home of two people who wouldn’t let her down. They helped Isabella stand up to her owner, and the courage to stand tall, to take a former slave owner to court, and to get her young son back from where he’d been sold down South.

She never forgot her brothers and sisters. She found some of them and lost others, which helped her decide that she had a “sojourn” ahead of her. And so, Isabella changed her name to Sojourner Truth, and she began to walk…

Sometimes, in searching for a really good children’s book, you may find one that seems almost like a gift to the parent as well.

That’s what you’ll get in “So Tall Within.”

Beautifully written with words that are partial poetry and part storytime, this book offers kids an easy-to-love biography of a woman they may have heard about, but just not enough. Author Gary D. Schmidt tells the saga of Sojourner Truth, her resolve, and her work – sometimes brutally, sometimes with fist-pumping joy, and always with beautiful artwork by Daniel Minter. While story plus art are, indeed, in a children’s book, both are where the gift for parents lies: pay close attention to left-page words and the illustrations; they are breathtakingly haunting and absolutely perfect.

For 5-to-8-year-olds who love a good story, or for parents who cherish a good read-aloud session and appreciate back-of-book biographical information, here it is. Your kids won’t walk for “So Tall Within” – they’ll run for it.