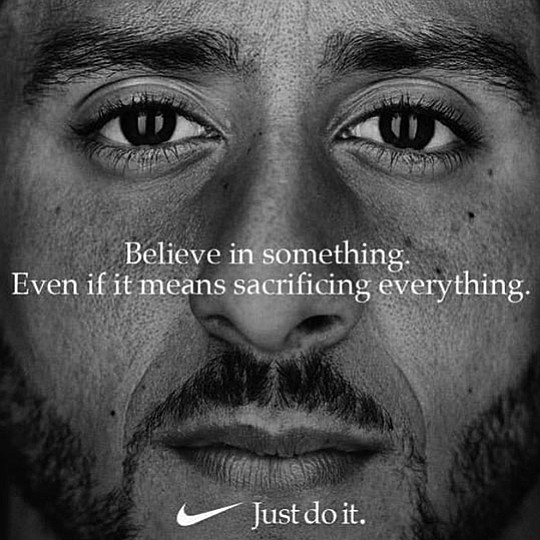 Three weeks after Nike launched its 30th anniversary “Just Do It” ad campaign, focused around former NFL player Colin Kaepernick, the smoke has cleared. And Nike and Kaepernick look like the winners.

Kaepernick became a lightning rod for criticism after he sparked a national movement by kneeling to protest police violence. He was effectively blacked balled from the NFL and even drew criticism from President Donald Trump, who called Kaepernick and other players who knelt “sons of bitches.”

The Nike-Kaepernick campaign was bound to draw controversy. And it did, with Kaepernick haters burning Nike merchandise and posting the pictures online, and some schools and municipalities saying they would ban Nike gear.

But statistics show the campaign paid off. Apart from generating millions of dollars in free advertising and linking the Nike brand with a cool sports star, the campaign boosted the company’s sales.

According to a CNBC article, Nike stock hit a record $83.90 per share and 170,000 people have joined its Instagram page. NBC reported that the company also saw a 31 percent jump in sales.

“Indeed, [Nike] management knows its American consumer well and the campaign featuring Mr. Kaepernick is a positive for the brand and likely its sales,” according to Wedbush Securities analyst Christopher Svezia.

“The ‘Kap’-Nike campaign has been a smashing success on two counts. It’s been a financial windfall for Nike. And most importantly, it sent a strong message to the NFL that Kap won the battle of public opinion off the field,” said Hutchinson.

However, some people have criticized Nike for also making donations to Republicans who have not taken action to curb police violence. But Hutchinson said Nike is hedging it’s bets, like most corporations.

“Nike is a major corporation and it’s in the business of making money and selling a product. Like any corporation, it has to market to a broad range of the public. That includes groups and individuals from all ethnic, religious views, and yes, political views,” he said.

The 30th anniversary “Just Do It” campaign has definitely raised Kaepernick’s profile. Recently, San Francisco 49ers fans called for him to be rehired after quarterback Jimmy Garoppolo went down with a knee injury. However, Hutchinson says that’s not likely. He believes Kaepernick’s playing days are over.

“He’s a social issues activist and a philanthropist. That’s his future. The NFL is not an option and he knows that,” said Hutchinson.

Kaepernick has an ongoing legal case against the NFL. He is also scheduled to receive Harvard’s W.E.B. Du Bois Medal, for contributions to Black culture, in October.