McDonnell hints he may remain in law enforcement 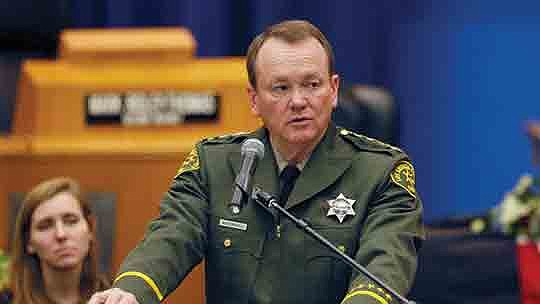 One day after conceding defeat in his reelection bid, Los Angeles County Sheriff Jim McDonnell said this week he has no plans to disappear from the law-enforcement world and is “looking forward to the next chapter.’’

McDonnell, speaking to reporters at the sheriff’s department downtown headquarters, touted accomplishments during his four years leading the agency, highlighting efforts to curb use of force against inmates and meet requirements of a federal consent decree.

He said he will offer support to incoming sheriff Alex Villanueva, but said he also would not hesitate to be a critic.

“While disappointed on one hand, I’ve been amazingly blessed on the other,’’ McDonnell said. “For the last 38 years, I have been living my dream. I’ve had the opportunity to be a participant and a player in the finest law enforcement arena in America, if not the world. I’ve had a chance to lead in three different organizations—the Los Angeles Police Department, the Long Beach Police Department and finishing here on Monday at the Los Angeles County Sheriff’s Department.

“I don’t feel like it’s over. I’m looking forward to the next chapter, but after almost four decades, I think about the great people I’ve had the opportunity and privilege to be able to work with, the challenges that so many have faced, the sacrifice of so many people I’ve known over those years who have given it all, whose name is on the memorial wall and who we pay tribute to forever. It’s a lot to take in in a short period of time.’’

McDonnell had held off on conceding the defeat while ballot-counting continued from the Nov. 6 election. As updated returns were slowly released, Villanueva’s lead steadily increased, and on Nov. 26, the numbers showed him with an insurmountable lead. McDonnell conceded the race that afternoon.

McDonnell said he would leave it to historians to dissect why he lost—becoming the first incumbent Los Angeles County sheriff to lose a reelection bid in more than a century—but said perhaps his campaign failed to properly convey the message about accomplishments during his tenure.

“The thing that could have been done better, maybe, is if we had some vehicle to be able to share in a more comprehensive way the success we’ve had in the past four years as an organization,’’ he said.

He recognized the politics that played into the nonpartisan race—with Villanueva portraying McDonnell as an ally of President Donald Trump—and warned that his successor should not tie himself to any political party.

“My belief is that somebody who is a police executive running the largest sheriff’s department in the country should be nonpartisan,’’ McDonnell said. “We should not be tied to either party. We’re here for everybody in the interests of public safety.’’

Villanueva will be sworn in as the new sheriff on Monday.