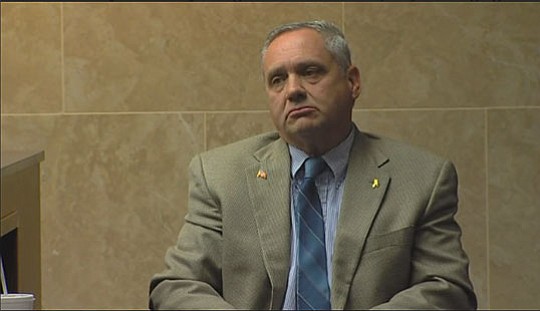 A white retired firefighter has been sentenced to 4-10 years in prison after firing a gun at a Black teenager who knocked on his door looking for directions last spring after he missed his school bus, reports Fox News Detroit. Last month, a jury found 53-year-old Jeffrey Zeigler guilty on the lesser assault charge than what the prosecution was aiming for, assault with intent to do great bodily harm. The prosecution had hoped to convict Zeigler of assault with intent to murder. The jury also found Zeigler guilty on a weapons charge. The judge ruled that Zeigler should spend two-10 years in prison on the assault charge, and two years for the weapons charge, to be served consecutively, not concurrently. He also gets credit on the weapons charge for 35 days time served. The case involved 14-year-old Brennan Walker, a Black student who told police he missed the school bus on April 12 and knocked on Zeigler's door in Rochester Hills after getting lost while walking. The teen says he ran after seeing a man inside the house grab a gun. Zeigler said he woke up to his wife's screams and that she believed someone was trying to break into their home. Zeigler's wife, Dana, testified that she panicked when she saw “a Black person standing at [her] door” and so she woke her husband up from a deep sleep. She testified she thought the person was trying to break in. The couple had dealt with a number of other break-ins over the years. Home security video showed Zeigler firing a shotgun toward Brennan, who was not struck. Zeigler claimed he had no idea the person on his porch was a teenage boy until he saw the surveillance video. “I felt extremely remorseful. I was… I was just shocked,” he said in court. He said he “absolutely” understood he did something wrong, and when asked if he would’ve done things differently: “I would have given him a ride to school.”