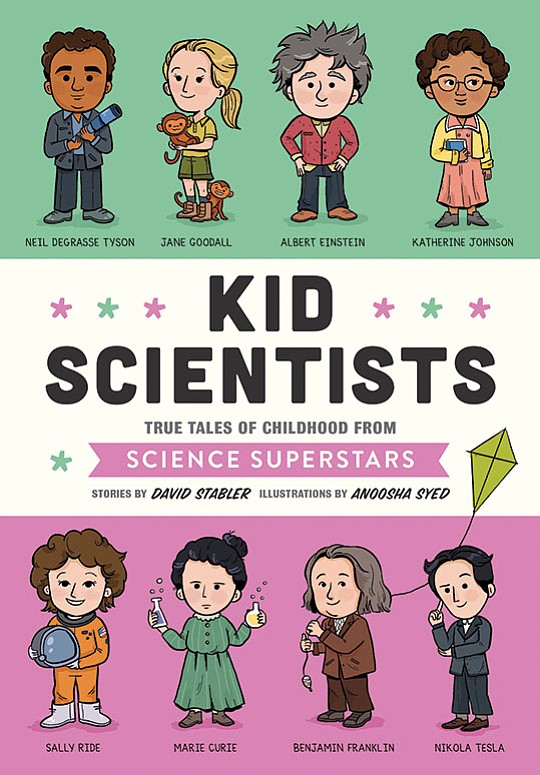 Your room is a great big mess.

At least that’s what your mother says but you know your room is a work in progress. You have an ongoing experiment here, an almost-finished one there, and look at what’s in the terrarium! Your room is your laboratory, Young Scientist, so read “Kid Scientists” by David Stabler, illustrations by Anoosha Syed (2018, Quirk Books), and see what your heroes were like when they were younger.

Gravity, black holes, humane animal control, computers, electricity, advanced math, can you imagine what life would be like if you didn’t know about those things? No worries because you do know, thanks to scientists. But check this out: once upon a time, those same scientists “were just ordinary kids” like you.

When she was small, she counted things obsessively. As a toddler, she followed her brother to classes and she was so smart that she started high school at age ten!  Later, when a teacher at a Black college said she’d “make a fine mathematician… that was all she needed to hear.” Johnson ultimately became one of a small handful of Black women to help NASA put an astronaut on the moon.

Neil deGrasse Tyson was so determined to become an astrophysicist that he started a dog-walking business to earn money for a telescope. On a walk through a nearby forest, Rachael Carson understood the effects of pollution on the environment; that love of nature led her to become a published “professional nature writer at the age of fifteen.”

Jane Goodall loved animals so much that she tried to keep earthworms in her bed (her mother explained why that wasn’t the greatest idea ever). George Washington Carver talked to plants when he was a boy; Marie Curie went to school under Russian control; Nikola Tesla inherited his love of invention from his mother; Salim Ali reportedly tried to potty-train a sparrow; and Temple Grandin discovered that she understood animals’ anxieties because she was a lot like them.

It’s been said that a child can’t be what a child can’t see. Fortunately for your budding astrophysicist, inventor, doctor, environmentalist, or mathematician, “Kid Scientists” will open her eyes with mini-bios of interesting and accomplished people.

But wouldn’t it be boring if that’s all your child got?  It would, which is why there’s more to this book: here, he’ll learn that his heroes were once kids who did goofy, funny, slightly naughty things in addition to normal kid activities. Author David Stabler also lends subtlety to those tales by quietly indicating that if famous scientists could have off-beat interests, then maybe no thread of curiosity is unworthy of exploration. Those are golden words for a child who marches to a heartbeat, a moonbeam, a pulsed laser, or the beat of a bird’s wings.

The perfect reader for “Kid Scientists” is the 8-to-12-year-old who loves biographical sketches or longs to explore any branch of science. It’s a book made for inquisitive minds, and if your kid’s like that, he’ll have room for it.