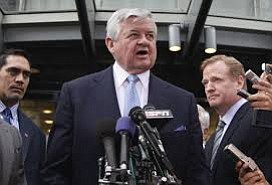 The International African American Museum (IAAM) has received its largest donation from individuals to-date. According to the Post and Courier, former Carolina Panthers owner Jerry Richardson and wife Rosalind have pledged $5 million toward the downtown project. Former Mayor Joe Riley and other officials announced the gift Thursday at the future museum site near the city’s Maritime Center at the former Gadsden’s Wharf, where tens of thousands of enslaved Africans first set foot in Charleston. The Richardsons did not attend.

Of the $5 million, $1 million will be used for construction and another $1 million for staffing and startup. The remaining funds will be set aside as an endowment to support field trips from schools in economically challenged neighborhoods in South Carolina, North Carolina and Georgia. “This will be a life-changing experience for these children,” Riley said. Museum CEO Michael Boulware Moore said estimates show the endowment could bring up to 20,000 students to the IAAM a year. “This is a very special day for Rosalind and me, having the opportunity to support the IAAM’s educational mission,” Richardson said in a written statement. “America will be a better place the moment the IAAM opens its doors on this historic ground.”

A North Carolina native and Wofford College graduate who made a fortune in the food-service industry, Richardson has a history of philanthropy in the Charleston area. In 2015, he donated $100,000 to families of the nine Emanuel AME Church shooting victims. More recently, his name has been connected with sexually inappropriate and racially insensitive behavior during his ownership of the NFL’s Panthers. Richardson, who was the founding owner, put the team up for sale after a Sports Illustrated article in December claimed that he made inappropriate sexual comments to women and, on a least one occasion, directed a racial slur at an African American scout.

This summer, Richardson was fined by the NFL for $2.75 million following an investigation that the league said substantiated the allegations made. He had sold the team a few weeks earlier to hedge fund billionaire David Tepper for a record $2.2 billion. Regarding the allegations, Moore said he and museum organizers are “focusing on the benefit the gift will give.”