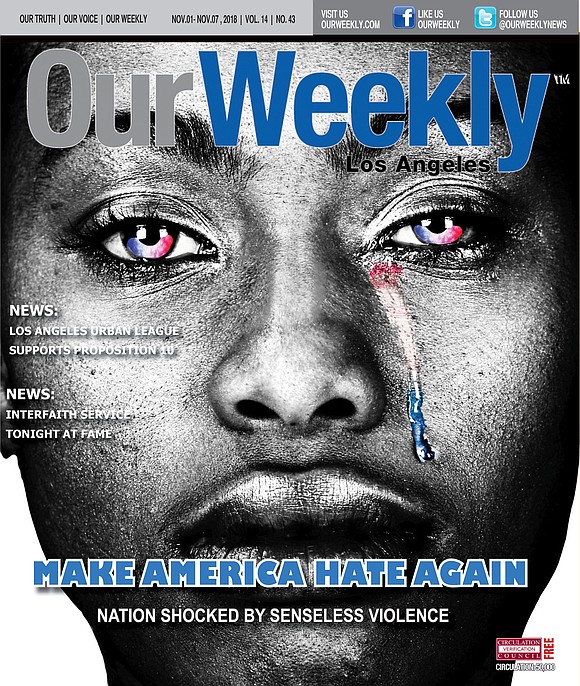 A week of domestic terrorism has many political watchers wondering if the base and xenophobic rhetoric of President Donald Trump led to not only the horrific mass shooting last weekend at Tree of Life Synagogue in Pittsburgh, but also the week-long mail bomb scares across the nation as well as the suspected racially motivated murder of two Black persons outside of as Kroger grocery store in Jeffersontown, Ky.

President Trump on Friday had lauded the FBI’s arrest of mail-bomb suspect Cesar Sayoc Jr,. 56, in promising “swift justice” for the suspect and denouncing as “despicable” the alarming political violence which has rocked his administration for the past 18 months. Two hours earlier, however, the president had tweeted his frustration about the media’s coverage of “this bomb stuff” in noting that the attention was hurting the GOP’s momentum heading into the Nov. 6 midterm elections.

A fixation with ‘migrant caravan’

After the arrest, Trump had turned from his prepared statement at the White House to return to familiar attacks on “fake polls,” “fake media” and the influence of “globalists” on American political culture. That comment prompted chants of “Lock him up!” from supporters gathered there railing against billionaire philanthropist George Soros who was the target of pipe bomb earlier in the week. On Monday, law enforcement officials said Sayoc “had a list of more than 100 people” to whom he intended to send packages. He had sent pipe bombs to a number of destinations, including those to former President Barack Obama and wife, Michelle; former President Bill Clinton and former Secretary of State Hillary Clinton; former Attorney General Eric Holder, Sen. Kamala Harris (by way of the San Diego Union newspaper), and two package bombs to Rep. Maxine Waters, one headed to her Washington, D.C. office and another intercepted in South Los Angeles.

The week ended in a series of mixed messages—and many attest missed opportunities—for Trump to address the rising cultural antipathy between his conservative coalition and the liberal voting wing. Michael Steele, a Republican strategist and past head of the Republican National Committee, said the president’s penchant for caustic language in rallying his base could be tempered after such a week of murder threats and ultimate loss of life.

“You want and expect presidential leadership in times like these to be strong, emphatic and consistent,” Steele said. “President Trump falls short on consistency. He’ll make a teleprompter speech, say the right thing, and then at 3 a..m. he’ll tweet and revert to viewing these events through a partisan or self-centered lens. That certainly undercuts his sincerity.”

Since his arrest, authorities have discovered more about Caesar Sayoc. Apparently, he lived in an alternative universe of conspiracy theories where monsters stalk people in Florida’s Everglades, a malevolent Jewish billionaire pays American children to stage school shootings, and German politicians are secretly being conceived using Adolf Hitler’s frozen sperm. Sayoc convinced himself that George Soros is behind the migrant caravan of Central American refugees heading toward the U.S. and therefore vented his rage against left-leaning public figures whom he believed are working in consort with the philanthropist.