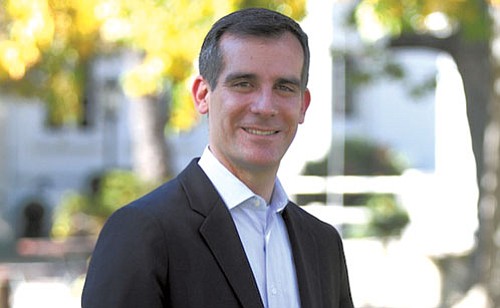 Los Angeles Mayor Eric Garcetti put his signature this week on a $9.9 billion budget for the 2018-19 fiscal year, a record level of funding that includes significant boosts for sidewalk repairs, homelessness programs and the Vision Zero program aimed at reducing traffic deaths.

“We must confront our city's biggest challenges with every available resource,'' Garcetti said. “This budget includes record investments in the kind of change that Angelenos can see and feel in their neighborhoods, and I'm grateful to my colleagues on the City Council for their hard work to get it over the finish line.''

The budget, which was approved by the City Council on May 21, includes at least $20 million for a new program to install temporary homeless shelters around the city. The spending plan also includes an overall increase in funds for homelessness programs, from the current year's $178.5 million to around $440 million. More than half of the new homeless spending will use funds from Measure HHH. The bond measure, which Garcetti helped convince city voters to approve in 2016, is expected to raise $1.2 billion over 10 years for permanent supportive housing construction.

The spending plan also increases the reserve fund to $351 million, or 5.67 percent of the overall budget, and includes a budget stabilization fund of $108.5 million.

“This budget strengthens our city's economic foundation and will improve the quality of life for all Angelenos,'' said Councilman Paul Krekorian, chair of the Budget and Finance Committee. “Thanks to the vision and leadership of Mayor Eric Garcetti and the work of the City Council, we've achieved a fiscally prudent and responsible spending plan that will bring immediate relief to our homeless neighbors and the neighborhoods they live in, fix more sidewalks and streets, trim more trees, and boost the number of police and firefighters in our communities.''