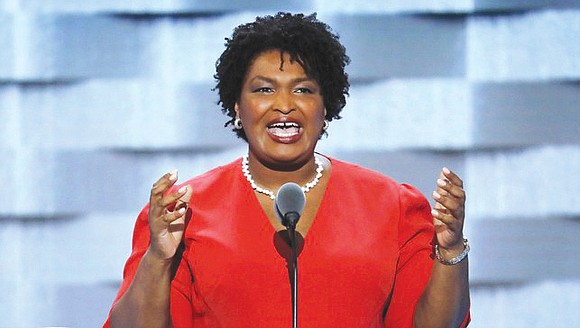 NPR (National Public Radio) reports that not one of the 50 states has a governor of color. However, the political climate is ripe this year for that to change for as many as six states. And one of those states is Georgia, traditionally a Republican state despite the fact that nearly half of its population is now non-white. In Georgia, high-profile state legislator Stacy Abrams is on a mission to become the Democratic candidate to become the Southern state’s first Black governor, and the first Black female governor in the country’s history. Other states that have Black candidates in the running include Florida, Kansas, Maryland, Wisconsin and Oklahoma. NPR reports, however, they all face an uphill battle. “I believe the only way to win Georgia is to... essentially get Democrats who have too often been overlooked and unheard to believe that this time if they engage, we can win,” Abrams said Her stump speech makes a nod to what her candidacy represents. She tells the story of being a high school valedictorian that was stopped when she was trying to attend a party for valedictorians with the governor. She says a guard told her, “This is a private event, you don't belong here.” Abrams said, “I'm running for governor because I intend to... open those gates wide so no one ever doubts they belong in our Georgia.” Standing in a crowd listening to Abrams recently was Ben Williams, 76, from nearby Mableton. He told NPR he sees Abrams' run as a seismic change in politics - on the level of Barack Obama's election. “We're in the deep south,” he said. “Stacey Abrams being elected as the first woman and the first Black person of a southern state (would be) tremendous. Tremendous.”