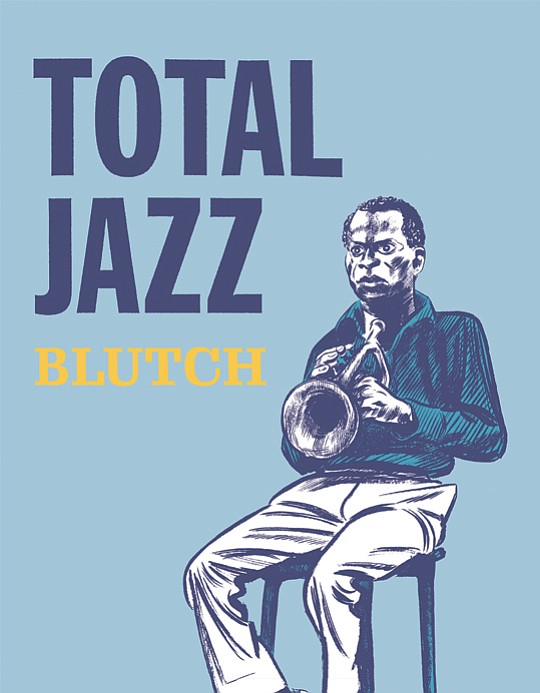 Among all the things our global neighbors find repugnant about America is its culture, which they simultaneously denigrate can’t get enough of. The French cartoonist Christian Hincker, better known by his pen name, “Blutch,” established himself through his 20-year tenure with the Franco-Belgian adult comics magazine “Fluide Glacial,” and the (defunct) jazz magazine ”Jazzman.” Along the way, he has received numerous awards, especially the “Grand Prix at Angouléme” (a prestigious, annual lifetime achievement award for comic artists in Belgium and France) in 2009.

Paradoxically, while he is obsessed with America and its cultural exports, he is not well known in the United States. His latest offering, “Total Jazz" ($19.99, Fantagraphics Books), is a volume culled from his out put while he was with”Jazzman.” “Total Jazz” pays homage to the love/hate relationship the French have with this American musical idiom. On might say Blutch has taken a sociological approach to the genre of his adoration, displaying the various arch types drawn to the music and the culture surrounding it. Among them are the cantankerous, ill-tempered collectors hording their albums from the outside world, the zealous concert/festival goers who religiously attend every event so they may criticize every aspect of them, and the ever present “groupies,” who serve as surrogate wives, and occasionally muses for the performers. At the zenith of this collective is the Jazz Detective, who appears at the end of the book. A Gallic “nerd” with an encyclopedic knowledge of anything remotely contacted to jazz, he exists to mope about a lost love as the ghost of Miles Davis comes to aggravate and torment him.

Like many devotees of ethnic culture, Blutch alternately idolizes and ridicules the subjects of his obsession. One sequence has a quartet of Italian fans stalk a Black female singer before cornering their idol in the final panel, where they lick the hands and feet of her nude body. This in turn brings up sensitive racial themes that emanate from more then a few of the vignettes in this collection.

The author himself appears at the very beginning of the book, as an Indian (in a patronizing portrayal) in an Apache village, in an episode whose connection the jazz idiom was not quite clear to this writer. Yet another has a crudely rendered Black couple having an argument, which turns into an all out brawl, before the male cold cocks his woman, then storms off to play his saxophone before an enthralled audience.

Blutch draws well enough to render an accurate likeness, as evidenced by the portrait of Miles Davis that graces the cover. Much of the time however, he resorts to a crude, ham fisted style that seems to suggest the primal underbelly of the demographic he depicts.