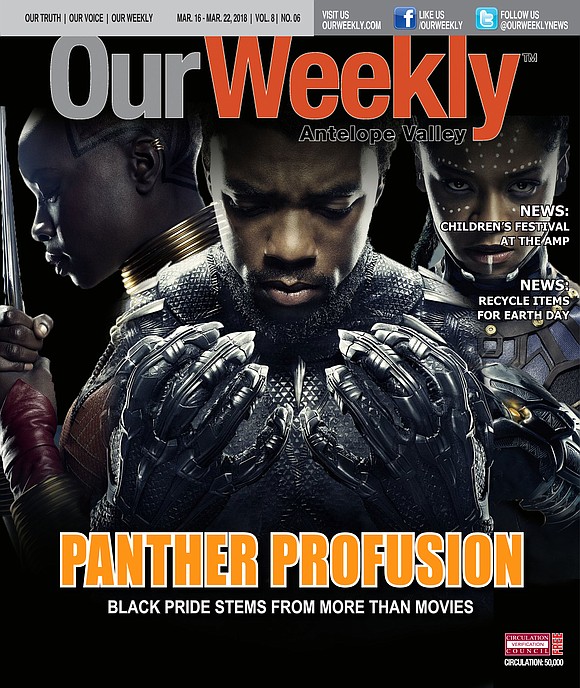 “Black Panther” remained dominant in its fourth weekend at the North American box office with $41.1 million at 3,942 locations, easily overtaking the opening weekend of fantasy-adventure “A Wrinkle in Time,” coincidentally starring a black female lead, with $33.5 million at 3,980 sites, estimates showed Sunday.

What analysts predicted would be a close contest among Disney titles for first place morphed into a landslide victory for “Black Panther.”

The Marvel title declined only 38 percent and generated the third-highest fourth weekend of all time, trailing only “Avatar” and “Star Wars: The Force Awakens.”

With $562 million in 24 days, “Black Panther” is now the seventh-highest domestic grosser of all time, reports Vanity fair. It’s the first film since “Star Wars: The Force Awakens” to lead the North American box office for four straight weekends and it’s grossed $1.08 billion worldwide, 21st highest of all time.

Marvel’s investment in a stand-alone movie for Wakanda’s king signals a new era for Black superheroes – and superhero movies at large.

“In the Nineties and the early 2000s, attempts to make Black superhero movies tended to play like Blaxploitation, running the gamut from intentionally hilarious (1993’s “Meteor Man” and 1994’s “Blankman”) or hilariously bad (“Steel” and “Spawn,” both 1997). They were usually analogues of white superheroes like Superman and Batman at best, and a one-note joke at worst”

“Black Panther already feels different from all of this. Coogler has set out to do something with the modern black superhero that all previous iterations have fallen short of doing: making it respectable, imaginative and powerful. The Afro-punk and Afrofuturism aesthetics, the unapologetic black swagger, the miniscule appearances from non-black characters – it’s an important resetting of a standard of what’s possible around creating a mythology for a black superhero.”

Not since Spike Lee’s “Malcolm X” in 1992 has there been so much hype and hope for a movie among African-American audiences. From special group outings planned by excited fans to crowdfunding campaigns to ensure children can see it, “Black Panther” has become a phenomenon.

In December, a viral video of two African-American men excited to see the movie’s poster with its all-star Black cast — “This is what White people get to feel like ALL THE TIME?!!!!” one man wrote on Twitter — seemed to capture the anticipation, garnering more than 2.5 million views.

The film is making a huge splash among viewers in Africa as well, dealing a powerful blow to the incendiary remarks about the continent by President Trump

Kani, a native of South Africa, expressed pride at seeing an “Afrofuturistic” society that celebrates traditional cultures and dreams of what the world’s second most populous continent can be.

“This time the sun now is shining on Africa,” he said. “This movie came at the right time. We’re struggling to find leaders that are exemplary and role models … so when you see the Black Panther as a young boy and he takes off that mask you think, ‘Oh my God, he looks like me. He is African and I am African. Now we can look up to some person who is African.”