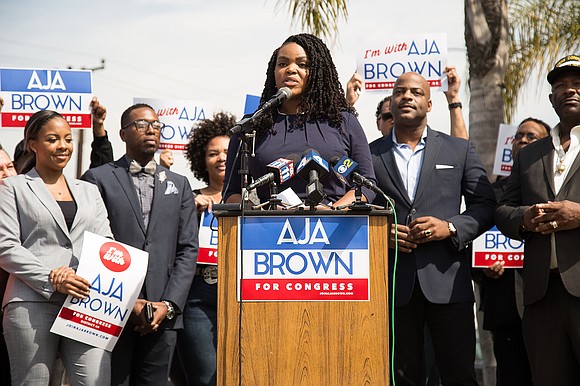 “For the past five years, I have had the honor and privilege of a lifetime to serve as the mayor of my community, the great city of Compton.

“When I assumed office, our city was on the brink of bankruptcy and insolvency, city services had ceased, investment had halted, crime had peaked, our unemployment reached a record high and most importantly many of our families had lost hope in what our community could be.

“I embarked on a journey to restore our city and lift the standard of leadership that would prove to bring some of the toughest battles of my life—yet I persisted day in and day out for the betterment of the lives of the 100,000 women, men and children that I serve.

“I believe being a mayor is one of the toughest jobs in America. Arguably, being mayor of Compton is one of the toughest assignments any public servant can have. Yet, we prevailed, led by a decisive vision for our shared future and the determination to succeed that I believe is manufactured in our soil, fertilized through hardships and runs through our veins pushing us to overcome insurmountable odds.

“Today, our city is thriving. Businesses have invested in Compton’s future. We’ve attracted over 1,000 new jobs,—including three Fortune 500 companies which has helped to reduce our unemployment rate over 60%.

“Violent crime is at record lows. We’ve welcomed several new grocery stores, eateries, affordable and market rate housing developments, and secured $9 million in new annual revenue to restore city services and repave every street in Compton over the next decade.

“We’ve welcomed Compton greats back to our city and they’ve invested in our future in major and sustainable ways. Our city is making a strong comeback and I’m proud to have served as a catalyst for real change that my community can see and feel.

“Today I shared a decision that I didn’t arrive at lightly.

“I have given my all to serve my community and now I’ve answered the call to serve the 44th District as our next congressional representative.

“I am of firm belief that political positions do not belong to the officeholder. They belong to the people that put us in office to serve them.

“To be clear, my decision to enter this race was not predicated on one person, but on the 700,000 residents of the 44th congressional district.

“I believe public service is a calling. Growing up, I never aspired to be in politics. I aspired to effect change in the lives of people.

“There is no doubt that our nation is in perilous times. Now, more than ever, we need strong leaders that can weather the storm, stay the course and stand fiercely on the front lines to effect change.

“I believe our nation is headed for a brighter future. But in order to realize these visions of a greater nation, it requires the next generation of leaders to come forward with new mindsets, new tenacity and new expectations for progress that reaches across party lines and rises above petty politics for a greater nation and brighter future. Only out of times of despair and oppression are great movements born.