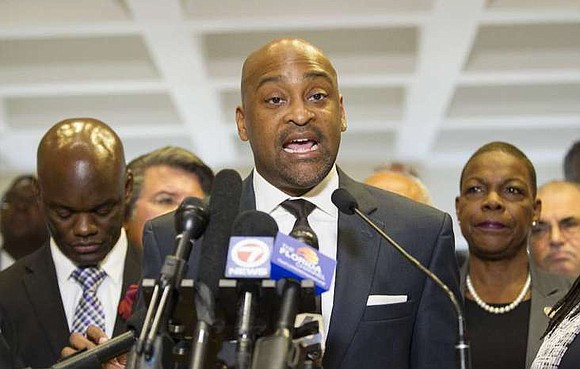 Brandon, a member of the 28-member Black caucus, opposes the school marshals program, the first statewide program of its kind in the country. In response to the Parkland mass shooting, legislative leaders are seeking changes that include a three-day waiting period and minimum age of 21 to buy any firearm; school safety measures and more school resource officers; expanded mental health treatment; and greater authority for police to seize weapons from people who threaten violence. Legislators will vote on the changes in the final days of the 2018 session next week. The most controversial change is a $67 million program to train and equip teachers and other school employees with concealed weapons during school hours, an idea long backed by the National Rifle Association (NRA), which opposes so-called gun-free zones.

“Minority kids are seen as problems, and they're the ones who are in the school-to-prison pipeline,” Braynon said. “They are the ones who overwhelmingly get suspended and now you're saying these kids are going to be subject to teachers, administrators, cafeteria workers, janitors, that may be armed?” Data from the state Department of Education shows wide racial disparities between school staff members and students and that Black students are much more likely to be disciplined than white students. Statewide, 61 percent of all staff members are white and racial minorities make up 61 percent of all students. The widest disparities are the rural inland counties of Glades, Hardee and Hendry, all with large minority populations and differences of 40 to 50 percentage points between the staff and student bodies. Racial disparities are greater in discipline cases.

Statewide, Blacks make up 23 percent of all students but accounted for 43 percent of out-of-school suspensions and 38 percent of in-school suspensions in the 2015-16 academic year, the most recent year available. The pattern persists in individual counties. In Hillsborough, Black students made up 21 percent of the school population that year but received 47 percent of out-of-school suspensions. In Broward, home of Douglas High, Black students received 71 percent of out-of-school suspensions but made up 22 percent of the school population. Black legislators, all but one of which are Democrats, are nearly unanimous that more guns is not the way to make schools safer. They blamed Republicans for years of relaxing gun restrictions that have increased gun violence, and of doing the gun lobby's bidding by supporting the arming of teachers and opposing a ban on assault weapons. “Violence, fear and death are becoming the norms for five-year-olds, six-year-olds, seven-year-olds,” said Rep. Bobby DuBose (D-Fort Lauderdale). “People are dying every single day, and if these tragedies aren't enough to spur this Legislature to take action, I don't think anything will.” President Donald J. Trump supports school marshals. Gov. Rick Scott strongly opposes the idea.