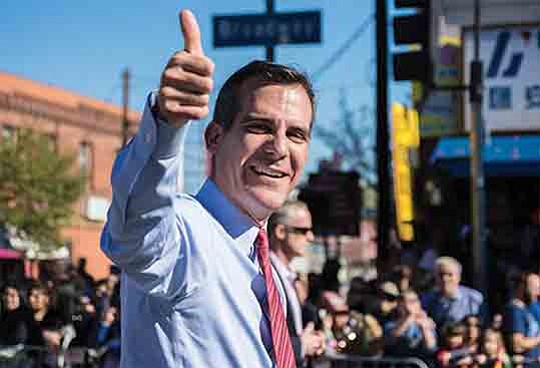 Mayor Eric Garcetti has voiced his support for an Assembly bill that aims to spend $1.5 billion in budget state surplus money to address homelessness.

Assembly Bill 3171 would require local governments to match the state dollars and result in $3 billion to fund homeless shelters, housing and services. The state money would come from its budget surplus this fiscal year, which is estimated to be around $6.1 billion.

After the bill was introduced earlier this month, Garcetti and the mayors of the 10 other largest cities in California threw their support behind it, and on Monday he spoke alongside other area leaders, including Assemblyman Miguel Santiago (D-Los Angeles) and Assemblywoman Laura Friedman (D-Glendale) at the James M. Wood Community Center in Downtown L.A.

“California’s homelessness crisis is a humanitarian emergency that shocks our conscience and compels all of us to act with urgency. Cities are first responders in this crisis, and we are leveraging every possible resource to get people off the street and into homes. But we need help,’’ Garcetti said.

“That is why I and the 10 other mayors of California’s largest cities are calling on the state Legislature to put our surplus dollars where they are desperately needed,’’ he said. "This bill would provide emergency bridge housing and services to help people with their most urgent needs, so that they can begin rebuilding their lives with the dignity that everyone deserves.’’

Los Angeles has about 25 percent of the state’s homeless population, according to the 2017 Point-In-Time Count, which put the number at 34,189 -- a 20 percent increase from the previous year. Garcetti’s office said the bill could result in $382 million from the state, which could be matched 1-1, for a total of $764 million in funding.