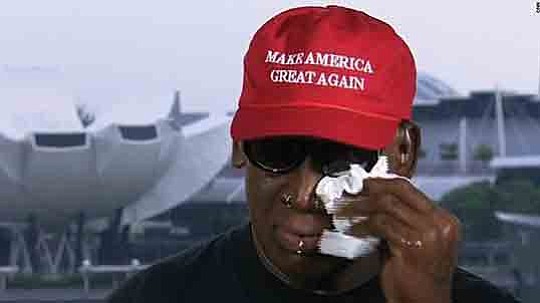 Years after leaving the NBA as one of its brightest stars, Dennis Rodman is still making the limelight. His latest step into news comes about as President Donald Trump tries to “make nice” with North Korean’s Kim Jong-un. Years ago, Rodman met with the controversial North Korean leader and reportedly helped free an American citizen being held against his will there. Rodman, who once wore a wedding dress in public, also has ties with President Trump, as he was a candidate on “Celebrity Apprentice.” In a rare interview this week, the former basketball player went on CNN, and by the end of the segment, he was crying. He also praised the President Trump while dogging former President Barack Obama. According to the CNN story, Rodman was actually instrumental in arranging the historic meeting between President Trump and Kim Jong-un. Rodman said when he first went to North Korea it took him a minute to feel at home. He went on to say, and this is where he broke down in tears, he was deeply hurt when President Obama rejected his offer to help smooth things over with the Korean leader. During the interview, where it’s obvious host Chris Cuomo is trying to keep from laughing, Rodman was wearing a MAGA (Make America Great Again) hat. Watch the interview here.