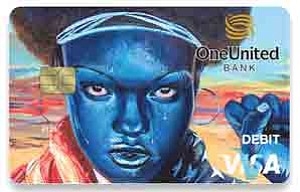 OneUnited Bank, the country’s largest Black-owned bank, has launched a debit card to highlight the importance of Black immigrants.

The card features an image of a Black woman with her fist raised forward. Behind her are the flags of Jamaica, Barbados and Haiti, some of the countries that represent black immigrant communities. The artwork was done by Addonis Parker, a celebrated muralist.

According to a press release, the Justice Visa bank card was created to celebrate the contributions of Black immigrants.

“As the largest Black-owned bank in America, we appreciate the difficult journey of immigrants and recognize their vast economic contributions to our country. Despite what we read in the press, immigrants contribute immensely to America’s success,” said Teri Williams, president and CEO of OneUnited Bank. “Many of us are immigrants, children of immigrants or grandchildren of immigrants. We relate to our ancestral countries – such as Jamaica, Haiti, Trinidad or Barbados – while also embracing America. We consider ourselves to be Black, African-American and/or Caribbean-Americans. We strongly agree with Martin Luther King Jr. – ‘Injustice anywhere is a threat to justice everywhere.’”

According to Williams, the card was requested by their customers.

“We were getting a lot requests from our customers who see themselves as Jamaican Americans and Haitian Americans,” said Williams.

The current political landscape is a difficult time for immigrants. President Donald Trump won the election by running on an anti-immigrant platform. Also, the Trump administration plans to reduce all forms of immigration, both legal and illegal. When he was in Europe, Trump accused immigrants of ruining the continent’s culture.

The Justice Visa debit card is a push back against the image that immigrants are a drain on society. According to the press release, a Department of Health and Human Services study found that immigrants had a $63 billion positive impact on the economy.  Also, a National Foundation for American Policy report found more than half of startups were launched by immigrants.

Williams says she has also noticed that Black immigrants tend to be wealthier than native-born African Americans.

The Justice VISA debit card seems to be popular with consumers.

“It’s one of our top selling cards,” said Williams and there are plans to add another flag to the image.

OneUnited Bank is based in Boston, Ma. but has clients across the country. It also has a large customer base in Los Angeles. Williams added the bank has also met with some African countries and the United Kingdom to discuss expanding its operations overseas. The bank has benefited from the “Bank Black Movement” where many African-American consumers decided to move their money out of “white-owned banks” and support Black financial institutions.

Williams added that the rise in online banking has also helped the growth of the bank. She said the bank is currently investing heavily in technology. She sees online banking as the future.

She compared banking to Blockbuster video stores which used to be on every corner, but now consumers can download movies. Younger generations are much more comfortable handling their banking needs online, she said.

“They don’t see the need to come into a bank,” said Williams.