Someone complained, the city responded by helping him ‘get right’ 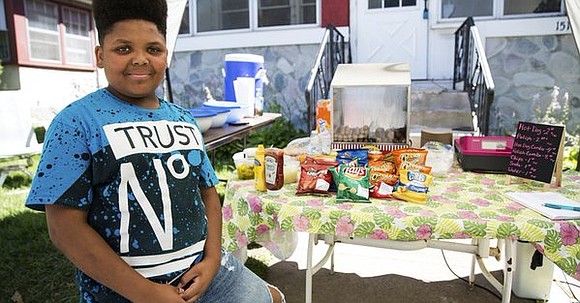 All across the country, stories are cropping up of white folks calling authorities on Black people for doing things that are completely within their legal rights. As time goes on, however, authorities and corporations are reacting with answers that often shut down the racists and solidify their commitments to diversity across the board. A perfect example of that “new mentality” happened in Minneapolis recently, where a young Black kid was targeted for selling hot dogs on a city street (actually in front of his own house). Some moron (or morons) reported the 13-year-old for selling hot dogs without a license. Rather than shut him down, the Minneapolis Department of Health decided to help Jaequan Faulkner set up his hot dog stand legally. In fact, officials at the agency even chipped in to pay the $87 permit fee. And so Mr. Faulkner’s Old Fashioned Hot Dogs continues to operate. Daniel Huff, the department’s environmental health director, told the Associated Press that the agency was excited to help a young man with such drive. The Huffington Post also contacted the Northside Economic Opportunity Network, which gave Jaequan some pointers on running a business and keeping his stand clean. Jaequan said he’s overwhelmed by the support. “I was actually kinda surprised, ’cause usually I would have one person at a time help me, but then with so many people coming at once, I’m like, wow. I realized how much people enjoy it,” he said. Jaequan began operating — with a license — on Monday (July 16). He started the hot dog stand with help from his uncle, who said Jaequan handles about 90 percent of the business. The teen now works four-hour days, from 11 a.m. until 3 p.m., and spends his free time “thinking about what’s next.” Maybe he’ll start a food cart, so he can take his operation on the road. Jaequan said he’s also thinking about donating some of his earnings to charities that help people with depression.