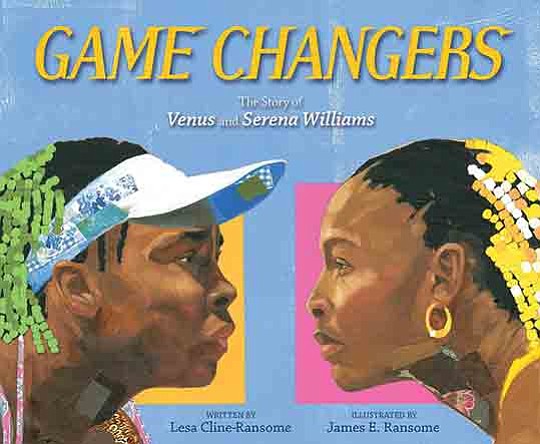 Those are the rules.

Every game has them, and rules are mostly helpful. They make it clear how to play and who can win – although sometimes, they don’t make any sense. Sometimes, they’re downright dumb and in “Game Changers” (2018, Simon & Schuster) by Lesa Cline-Ransome, illustrated by James E. Ransome, those rules are made to be grand-slammed.

Serena and Venus Williams were about a year-and-a-half apart in age but were “as close as two sisters could be.” Wherever you’d find Serena, you’d find Venus. Where Venus was, there was Serena – especially on the tennis court.

Before the sun was up most days, the Williams girls were awake and standing on the court in their Compton neighborhood, getting rid of trash and broken glass so they could practice their serves and backhands. People laughed at their father, Richard, because he believed that his youngest daughters could get themselves out of Compton, but he held fast to the dream.

When most kids were outside playing, Venus and Serena would practice. When they weren’t practicing with “secondhand” equipment, they ran laps and took ballet lessons. They also had to learn to drop to the ground quickly because of gangs and gun violence in their neighborhood.

But that all paid off when, by age ten, Venus won “every single one of her sixty-three junior tournaments” and Serena was “not far behind.” At fourteen, Venus played professionally. A year later, Serena did the same thing.

Fans were astounded at the girls’ talents but some people were upset when they saw two Black girls in what had been “a nearly all-white sport.” Venus and Serena’s father had anticipated that, though: years before, he hired kids from the neighborhood to yell every nasty thing they could think of and his daughters learned to ignore them.

In 1998, the Williams sisters faced one another for the first time, but it wouldn’t be the last. It didn’t matter then that Venus won – Serena’s time would come and when it was her turn to beat her sister, Venus cheered as loud as everyone else, just as she still does today.

For a child – especially one who’s laser-focused on a sport or a dream – there are few books out there that are as inspirational as “Game Changers.”  Just be aware of the age of said child before you give this book.

Truly, there’s no mistaking the message inside here. Author Lesa Cline-Ransome makes it clear that the Williams sisters’ determination was how they got where they are, and the afterword fills in a lot of blanks. That’s great, if you’re an adult or older child so beware: don’t let the illustrations – colorful, wonderful artwork by James E. Ransome – fool you. See them, and you might think this is a book for smaller children but really, it’s more for bigger kids.

Even so, with the right approach, the message will sink in so let this book grow with your preschooler while your grade-schooler absorbs it now. For kids who love tennis or need a stick-to-it-iveness reminder, “Game Changers” is a great match.