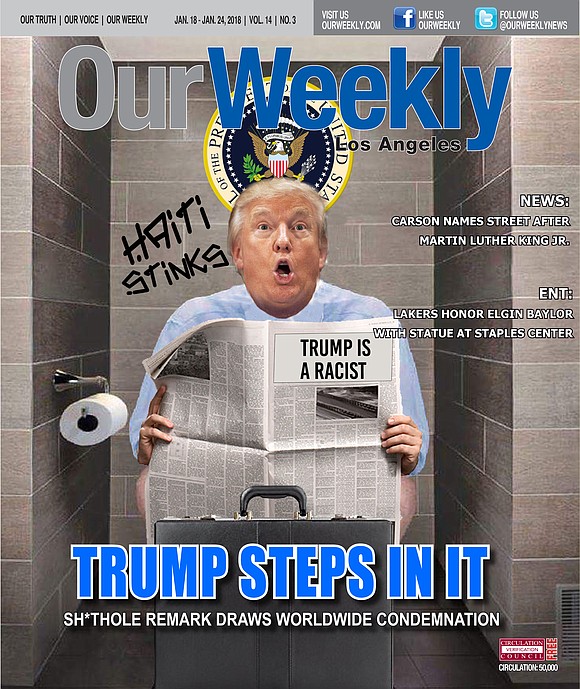 President Donald Trump's alleged “shthole countries” remarks during a bipartisan meeting on immigration last week have once again caused Americans to label him a racist. Trump asking the question “Why are we having all these people from shthole countries come here?” after becoming reportedly frustrated during the meeting, adding he'd prefer people from Norway to come to the United States. According to statistics from the Central Intelligence Agency, Norway is a 98-percent White country

On Friday morning, Trump denied he uttered the phrase in reference to Haiti, El Salvador and African countries, stating he used “tough” rhetoric but it wasn't as bad as reports have claimed. But Democratic Sen. Dick Durbin of Illinois, who was in the room for the meeting,slammed Trump the next day over his denials and claimed the president said “these hate-filled things and he said them repeatedly.” Republican Sen. Lindsey Graham of South Carolina, also in attendance, reportedly challenged Trump over his reported racially charged comments and did not deny Durbin's account in a statement on the incident released Friday

According to  Mae Ngai, an immigration historian at Columbia University, the historical context behind Trump's content is indeed true. At various times, America’s immigration system has openly favored some countries over others, with the system set up to specifically keep out immigrants from “countries that are doing badly,” as Trump put it “ sh*tholes,”often for reasons that were based on prejudice.

The idea that an American president would hold these views is perhaps not so shocking based on the United States being a nation that was built by slaves and many of its founders were slave owners. Thus, it was born out of racism in many ways, which has had repeating consequences throughout its history that directly impact Africans. Historians down through the years have documented how our nation's chief executives have spewed out racist remarks and directly disrespected African Americans. It was common and well documented for American presidents to make racist comments prior to World War II and rare after the war.

The following are bigoted quotes or acts that offended African Americans during post World War II.

Franklin Delano Roosevelt's failure to invite Jesse Owens, the famous American track and field athlete and four-time Olympic gold medalist in the 1936 Games, to the White House. According to Owens “Hitler didn’t snub me; it was our president who snubbed me. The president didn’t even send a telegram.”   Owens wouldn’t be invited to the White House for almost 20 years — not until Dwight Eisenhower named him “Ambassador of Sports” in 1955. Some historians believe Owens was not invited based on a politics because Roosevelt needed Southern political allies. Boxing great Joe Louis did visit the White House a few weeks prior to fighting Max Schmeling.

In 1954, President Dwight D. Eisenhower told Supreme Court Chief Justice Earl Warren that White Southerners “are not bad people.” All they are concerned about, Eisenhower reportedly said, is to see that their “sweet little girls are not required to sit in school alongside some big overgrown Negroes” while discussing the desegregation of schools.