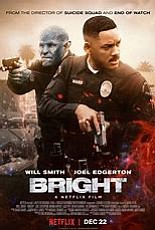 On top of being among the most well rounded entertainers in Show Biz today,

”the Fresh Prince” is as savvy a promoter as any in this day of unbridled marketing. If his career as an actor/rapper ever peppers out, he could well make in roads into the world of advertising — or even global diplomacy

In press advances for the release of 2016’s “Suicide Squad,” mega-star Will Smith linked the story line to the ascension of our present chief executive and America’s current indulgence in Islamophobia. In his latest offering, the Netflix produced “Bright,” he uses his matinee charisma to elevate what is essentially a buddy cop film repurposed for Netflix’ assault on the home entertainment market.

On the surface, Bright appears to be a tale in the sub-genre of science fiction known as alternative reality (or alternate history), wherein the story unfolds in setting much like the present day, albeit with historical events altered in significant ways. Thusly, Smith’s LAPD Sergeant Daryl Ward pounds the mean streets of a Los Angeles much like the burg we (alternately) love and loath, with a motley crew of maniacal gangbangers and morally ambivalent police officers watching over them (but ever ready to forsake their oath and, as Ward says, dive into some “…“ole school Rampart st” should the opportunity present itself).

This “parallel universe” deviates from our own by the presence of extraterrestrial dwarves, elves and especially “Orcs,” who appear to have replaced the earth born minorities as the despised “others.” That a Black officer, Smith/Ward, is partnered with the first Orc (Joel Edgerton as Nick Jakoby) on the police force is presumably the movie’s attempt at irony.

Early critics have alternately praised and panned this foray into the uncharted streaming morass, but all have overlooked its resemblance to 1988’s “Alien Nation” (and the 1990 T V series it spawned) starring James Caan and Mandy Patinkin as the “Newcomer” alien. Aside from that, the script (by Max Landis, son of fabled comedy/horror filmmaker John Landis) hints but doesn’t fully explain how these Orcs and other mystical creatures came to exist besides their human contemporaries.

While not a cinematic masterpiece (Oscar buzz is already in the air for Edgerton’s “Orc” makeup), this David Ayer directed thriller serves as a commentary on Los Angeles’ racial dysfunction. Needless to say, Smith’s presence elevates it to at least an entertaining tidbit for consumption within the confines of your abode.

“Bright,” is available on Netflix.