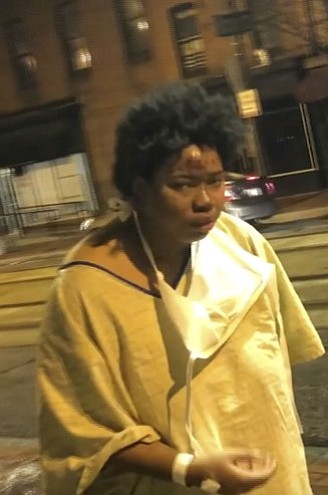 Social media is not only in shock, it’s in an uproar over the cruel manner is which a hospital in Baltimore discharged a Black woman in the dead of winter with nothing but a hospital gown. The man who said he came to the aid of the woman wearing only a gown and socks said he was left outraged and stunned at how she was treated, reports the Associated Press. Imamu Baraka, identified in local reports as the person who sought to help the woman, told the AP that he was so angry he decided to record Tuesday night’s events on his cellphone, fearing that no one would believe him if he reported a woman being left at a bus stop like that. “I saw the unthinkable: another human in a wheelchair being wheeled out in the dead of cold,” he said in a phone interview. He described frigid temperatures in the 30s and a cold wind blowing at the woman’s hospital gown, exposing her to the elements. Baraka, who said he has a psychotherapy practice in a building across the street from the Maryland Medical Center Midtown Campus, said he rushed back to his office, retrieved his cellphone, returned and hit “record” while growing increasingly angry. As a medical professional, the psychotherapist said he sought to keep his emotions in check even as he repeatedly challenged those who had wheeled the woman out to the street in the dark. “At first I was shocked. I couldn’t believe what I was seeing. And I moved beyond that to the next level from being shocked. I became ... irritated and fearful for the young lady. And then I became angry,” he recalled. He added that he failed to get satisfactory answers as he tried to help the woman. Of those who brought her outdoors, he said: “I asked them three times, I asked them specifically, ‘Are you going to leave this lady out here like this?’ They kept walking. They then went inside of the building.” He said he went and asked a security guard outside the hospital for a supervisor and was told, “I am the supervisor.” Rebuffed, he said, he then went and tried to help the woman shelter in the bus stop while calling 911 for an ambulance. He said he asked the arriving ambulance crew where they would take her, and they replied “back to the hospital.” Recalled Baraka, “I said, ‘Are you kidding me, they just dumped her on the curb’.” It wasn't immediately clear what happened to the woman after she was driven back toward the hospital. But the hospital confirmed in a statement that the woman was discharged that Tuesday night. Dr. Mohan Suntha, president and CEO of University of Maryland Medical Center Midtown Campus, told a news conference that the hospital had “failed” after the video posted on Facebook showed the unidentified woman mumbling and appearing disoriented in frigid weather outside. Suntha also said there were no excuses for what happened to the woman. “We believe firmly that we provided appropriate medical care to a patient who came to us in need, but where we absolutely failed, and where we own that failure, is in the demonstration of basic humanity and compassion as a patient was being discharged from our organization after having received that care,” he said. He added that the woman wasn’t mistreated while in the hospital’s care and that the incident was isolated and that hospital officials were conducting an extensive internal review. Said Suntha, “We do not believe that what occurred in any way defines who we are as an organization. There has been a lot of conversation since this incident came to light.”