Long-awaited ‘Black Panther’ at a theater near you tomorrow 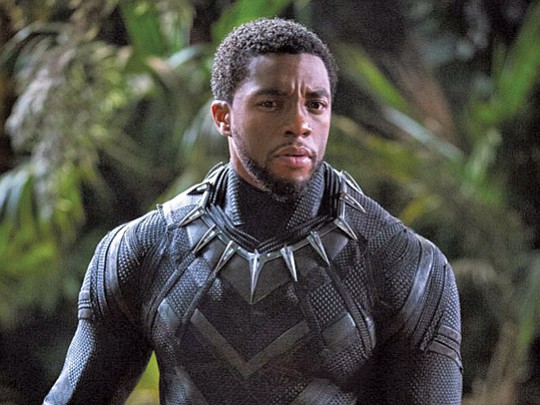 Well, the moment has finally arrived.

Black people, dust off your dashikis, fluff your afros, shine your medallions, and polish your leather jackets.

For the next several weeks, theaters across the country will experience “blackouts” as throngs of African American viewers congregate to watch Marvel’s long-awaited superhero movie “Black Panther.”

Early box office projections suggest the overall turnout for this film may exceed the record number of Black and Brown voters who emerged to support Barack Obama during his first election in 2008.

According to multiple sources, Black Panther outpaced the first-day advance sales of any previous Marvel film, including former top-seller “Captain America: Civil War(the movie that, of course, introduced Chadwick Boseman as T’Challa, the Black Panther, in the first place).

T’Challa is heir to the centuries-old ruling dynasty of the African kingdom Wakanda, and ritual leader of its Panther Clan.

He is a brilliant tactician, strategist, scientist, tracker and a master of all forms of unarmed combat whose unique hybrid fighting style incorporates acrobatics and aspects of animal mimicry.

Despite these abilities and his massive family-fortune, Black Panther comics are filled with themes of Western imperialism, colonialism, and neo-colonialism in Africa. The movie, undoubtedly, highlights these realities as well.

The “Black Panther” box office is poised to set records this upcoming weekend with independent film trackers predicting that the newest Marvel superhero film could make $165 million over the four-day weekend, The Wrap reported.

While Disney is setting its sights lower, predicting a four-day total of $150 million, “Black Panther” by all predictions is expected to rank in the top 10 of February openings.

“Black Panther is riding an incredible wave of momentum right now,” Fandango Editor Erik Davis said in a statement. “It’s one of the biggest and most anticipated movies to ever open in the month of February, and its trailers have electrified the Internet. Tickets have been going fast ever since presales started on Fandango late Monday.”

Despite the film’s early financial success, and the platform its given a predominately Black cast and crew to showcase their wares, a Change.org petition is asking: “what exactly will the Black community gain, aside from another symbolic victory?”

The petition asks for Marvel to invest 25 percent of its worldwide profit in Back communities and “programs within these communities that focus on S.T.E.M” educational programs.

Created by a user named Chaz Gormley, the petition’s description said that Marvel and Walt Disney Co. have “targeted the Black community with their advertisements” for the film.