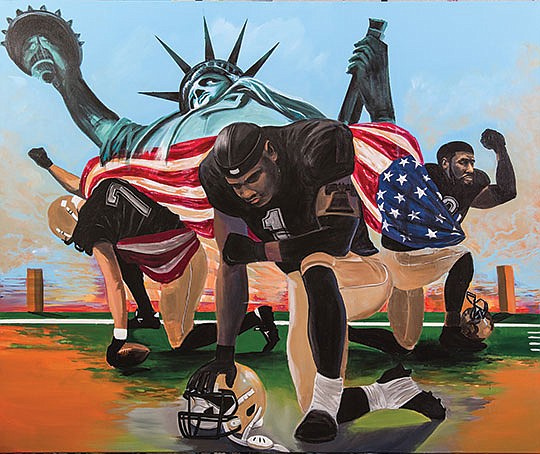 OneUnited Bank, the nation’s largest black-owned bank, is taking another bold move to align with its customers. The bank recently announced the “Take a Knee” campaign which supports former NFL star Colin Kaepernick’s campaign to raise awareness about police violence. The bank’s “Take a Knee” campaign also features a painting of three football players taking a knee and raising their fists. The piece of art, titled “Last Man Standing,” was painted by Addonis Parker, a Miami-based muralist.

"Throughout history, art has been used to raise awareness about social issues and affect positive change. We are honored to unveil ‘Last Man Standing’ and support the ACLU and BMe Community as we continue to support the #BankBlack and #BuyBlack Movement and advocate for social justice," said Teri Williams, president and chief operating officer of OneUnited Bank.

According to Williams, one of the goals of the campaign is to try and return the Kaepernick-inspired protest to focus on police brutality and criminal justice reform. The message got muddled when President Donald Trump weighed in and tried to paint the protesting players as unpatriotic and anti-military.

“We really believe that the ‘Take a Knee’ protest was happening for a purpose that was lost,” Williams said.

Williams added that OneUnited Bank likes supporting issues which are important to its customers. Many of the bank’s customers are African American and immigrants, and so issues of police brutality and criminal justice reform are important to them.

“It’s important for us, the largest black owned-bank, to stand up and support social issues,” said Williams.

But supporting the “Take a Knee” campaign has not come without criticism. While most of the bank’s customers support the campaign, Williams said they have been criticized on social media by some people who still misunderstand the point of Kaepernick’s original protest.

It seems some large corporations are also deciding to take bold stands on social issues. Nike backed Kaepernick and made him the face of its 30th anniversary Just Do It Campaign. And it worked, because even though there were some initial protests, the company later saw record sales.

Supporting causes such as Black Lives Matter and the “Take a Knee” campaign have also helped OneUnited Bank too. They’ve attracted more business as consumers decide they want to support a corporation that backs causes they are passionate about.

“They want to back a bank, like us, because they believe in our mission,” Williams noted, adding that she has noticed that trend is more prevalent in Millennials and other younger consumers.

“They really do want to do business with an organization that reflects their values,” she said.