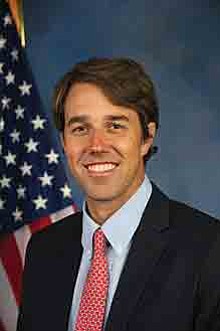 This year elections have drawn candidates that are challenging the norm and actually addressing issues on the minds of many Americans. The man challenging Ted Cruz for Senate in Texas earned national praise for his speech on kneeling during the anthem and the power of peaceful protest, reports the Huffington Post. That’s Rep. Beto O’Rourke (D-Texas), who went viral this week for his swift defense of players who have chosen to kneel in protest of systemic racial injustice. The congressman earned national praise on Wednesday (Aug. 22) for days-old comments in which he said he could think of “nothing more American” than the protests, meant to call attention to police brutality against Black citizens. NFL players who have kneeled during the national anthem at games have sparked a nationwide debate about whether the protest for racial justice is a slight on the American military. O’Rourke made a powerful defense of the act in response to a question at a Houston campaign stop last week. “My short answer is no, I don’t think it’s disrespectful,” O’Rourke replied. “Now here’s my longer answer, but I’m going try to make sure I get this right because I think it’s a really important question.” O’Rourke, who is challenging Ted Cruz’s Senate seat, called upon the historic lessons of peaceful protest brought forth by Rev. Martin Luther King Jr. during the civil rights era. He recounted examples of Americans who lost their lives for civil rights, such as the three young men killed in Philadelphia, Mississippi, in 1964 and the girls who died in the Birmingham church bombing the year before. “Peaceful, nonviolent protest including taking a knee at a football game to point out that Black men, unarmed, Black teenagers, unarmed and Black children, unarmed, are being killed at a frightening level right now, including by law enforcement, without accountability and without justice,” O’Rourke told the crowd. Cruz, who previously called players who kneeled “spoiled athletes,” slammed O’Rourke for the comment. Addressing it at a Corpus Christi campaign stop Saturday, Cruz told a crowd, “When Beto O’Rourke says he can’t think of anything more American [than players taking a knee], well, I got to tell you, I can.” O’Rourke’s response has been viewed more than 7 million times on Twitter alone. “Selma” director Ava DuVernay tweeted that she would be “keeping an eye on this guy.” New York Times columnist Charles Blow said he was “sold” on the candidate. The NFL issued a new policy in May that would impose a fine on players kneeling during the anthem, though that hasn’t stopped players from engaging in the protest during this year’s preseason. Three Philadelphia Eagles players sat out the anthem last Thursday at a game against the New England Patriots, while two other players chose to stay in the stadium tunnel.