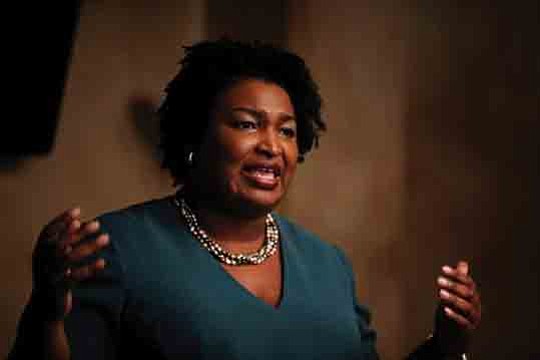 Formuch of this year, Our Weekly hasbeen reporting on Stacey Abrams, a

Georgia woman whose campaign to becomegovernor of the state is drawing

national attention. Abrams, a Black woman, hasreceived the support of

a variety of high profile politicians, including formerPresident

(D-California)and Rep. Corey Booker (D-New Jersey) among others. If

elected, she will becomethe first female governor of the southern

state, as well as its first Blackgovernor. Georgia has been electing

base. Now U.S.News & World Report and other news organizations are

voter suppression.” The two-member local elections board is expected

tovote on Friday (Aug. 24) on a proposal to shutter seven of nine

where roughly 60percent of the 7,800 residents are Black. The board

because they are not wheelchairaccessible. Both Stacey Abrams, the

Democratic nominee who is seeking to becomethe first female

Brian Kemp, who is white and serves as Georgia's secretary of

state,urged county officials to drop the plan. “Although state law

effort and focus on preparingfor a secure, accessible, and fair

election for voters this November,” Kempsaid in a statement. Todd

Black, the county’s elections director, did notrespond on Monday to

calls or an email from U.S.News seeking comment. Black is white and

the other board member isAfrican-American, according to Sean Young,

legal director for the AmericanCivil Liberties Union (ACLU) of

Georgia, who attended the board’s meeting onThursday (Aug. 16) when

the closure proposal was discussed. Voting rights couldbecome a

flashpoint in the governor’s race, as Abrams seeks to turn out

Atlanta. In the past, shehas criticized Kemp as an architect of voter

suppression tactics, an accusationhe has denied. “Every Georgian in

every county deserves to have their voicerepresented at the voting

booth and in our government,” said Abrams, a formerDemocratic House

minority leader in Georgia’s legislature and founder of theNew Georgia

fraud, which it denied. The Washington-based Lawyers’ Committee for

elections boardthreatening to sue if the closures go ahead. “We are

deeply troubled by thisproposal which would impair the ability of

polls,” Kristen Clarke, president and executivedirector of the

Lawyers’ Committee, said. Clarke said some of the proposedclosures are

in areas with little or no public transportation, leaving votersmiles

from voting sites with no realistic way of reaching them.