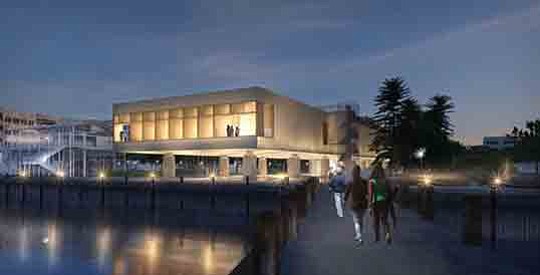 Charleston’s planned International African American Museum, which has been in the works for more than 18 years, is closing in on its $75 million fundraising goal, reports the Post and Courier. The Charleston Naval Complex Redevelopment Authority voted Tuesday (Aug. 7) to approve $11 million for the museum, essentially completing the state’s $25 million pledge toward the project and ensuring that construction will begin early next year. Former Charleston Mayor Joe Riley, who has spearheaded efforts to build the museum, called the RDA’s pledge “really wonderful news and a great partnership.” The RDA’s board unanimously agreed to the donation, which will be paid in two equal installments during the next two fiscal years. Museum CEO Michael Boulware Moore said the $11 million “gets us across a major fundraising obstacle.” Retired Rear Adm. William Schachte, chair of the RDA’s board, said the authority was formed in 1994 after the Charleston Naval Base was targeted for closure, and its mission extends beyond the former base and shipyard to include revitalizing the tri-county area. “The IAAM will tell an important part of our nation’s history,” he said. “Part of our mission at the Charleston RDA is to help revitalize the tri-county area. The IAAM will certainly impact our region and communities well beyond South Carolina, in a positive way.” The city of Charleston, which has pledged land and $12.5 million toward the museum, will oversee its construction. The City Council is expected to consider a construction contract with Turner Construction and Brownstone Construction Group of Columbia. “We’re confident construction will begin in the first quarter of next year,” Riley said.