Reminiscent of ‘Lynwood Vikings’ in 1980s 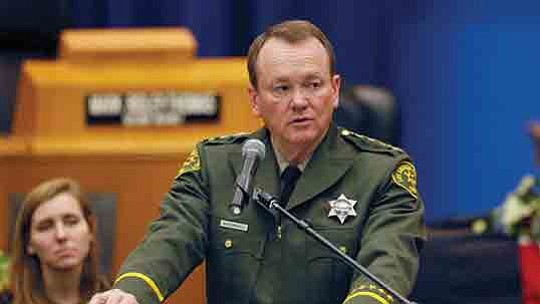 Sheriff Jim McDonnell has revealed that his office has opened an investigation into whether secret gangs that might be condoning criminal acts are operating within the ranks of Los Angeles County Sheriff’s deputies.

The department, along with the Sheriff’s Inspector General and county counsel, will look into why the groups form, whether they are exclusive, if members are required to act a certain way and if they endorse bad behavior, the Los Angeles Times reported.

“Renegade cliques erode public confidence as well as internal morale, and they will not be tolerated within the Los Angeles County Sheriff’s Department,’’ McDonnell said at a recent meeting of the Sheriff Civilian Oversight Commission on Thursday, according to the Times.

McDonnell previously had said that he was investigating the matter.

“I want to be clear this incident HAS been under investigation since it occurred,’’ he tweeted on July 13. “As (with) any investigation, any new evidence or info that may be uncovered will be included & reviewed. If our investigation finds any evidence of misconduct, appropriate action will be taken. #LASDTattoo’’

Concerns were first raised over a deposition given in May by Deputy Samuel Aldama, who described under oath a tattoo on his calf featuring a skull in a military-style helmet bearing the letters CPT for Compton, along with a rifle, encircled by flames. He said he got the tattoo in June 2016, about two months before he was involved in the fatal shooting of Donta Taylor, The Times reported previously.

John Sweeney, who represents Taylor’s family, played for reporters a portion of Aldama’s videotaped deposition. At one point, Aldama is asked if he has any “ill feelings toward African Americans in general.’’ After a long pause, Aldama responds, “I do, sir,’’ explaining, "I grew up in the city of Compton, sir.’’

“I’ve never heard testimony like that before in my life, and it was bone-chilling that I was sitting across the table from a person who has a badge and a gun,’’ Sweeney said.

McDonnell said two weeks ago that for the past year, the department has been examining deputy tattoos, logos and symbolism within the organization. He said there is also a separate administrative investigation into the shooting, which may address the deputy’s admissions.

“I’m not somebody from a generation where tattoos are accepted the way they are today,’’ said McDonnell, who said he was unhappy when he found out a couple weeks ago about the deputy’s admissions under oath, The Times reported. "I’m looking at what’s behind it. Is it just body art? Is it something that reflects well on our core values?’’