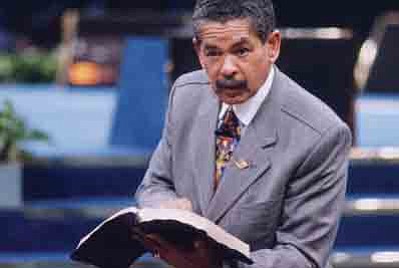 “Welcome To Ever Increasing Faith! Remember these words from the book of Romans chapter 10 verse 17, ‘So Faith comes by hearing, and hearing by the word of God…’” said Apostle Frederick K.C. Price, pastor and founder of Crenshaw Christian Center, reciting the scripture he’s used for decades to introduce his “Ever Increasing Faith” broadcast that has helped brand him as an icon of faith.

“Ever Increasing Faith” (EIF) was a welcomed voice every Sunday morning in thousands of southland homes when the Los Angeles-based ministry began broadcasting in 1978.

On Sunday, April 22, EIF celebrated its 40th anniversary. The celebration was held at the world-renowned FaithDome, home of Ever Increasing Faith Ministries and Crenshaw Christian Center, located at 7901 S. Vermont Ave. in Los Angeles.

Having begun broadcasting on station KTTV Channel 11 in Los Angeles, EIF was one of the first African-American ministries to broadcast on television. Today it has grown into a worldwide television ministry. EIF is one of the longest, continuously running Christian teaching programs on television. Keeping step with the on-demand viewing generation, it can be seen on Facebook, YouTube Live, AppleTV, ROKU and Amazon FireTV.

“Whether it’s faith to receive healing, faith to prosper financially, or faith to overcome adversities to restore your life, Apostle Price has taught that faith in God possess divine power to transform your life to do the impossible,” said Michael Evans, Vice President of Marketing at EIF Ministries. “Apostle has authored over 50 books and mentored hundreds of pastors from around the world. Apostle is 86 years old. I’m glad we’re able to still celebrate with him” he added

In 2010, Apostle Price passed on the mantle to his son, Fred Price, Jr. Pastor Price, Jr. stepped down about a year ago. In a bold act of integrity, he apologized to his faithful congregation for his misdeeds and stepped down to reflect and study. While the rumor mill characterized his misstep, the congregation remained dedicated to the son. Two weeks ago, Pastor Price, Jr. announced that he would return to the pulpit soon amid cheers and a standing ovation.

The anniversary festivities will kick-off at 10 a.m, with praise and worship starting at 9:30 am. Festivities include a special live and video presentations and testimonies by those who were influenced by the trail-blazing father who stepped out in faith to start a television ministry.

For more information about the ministry resources and anniversary, visit www.faithdome.org or call (323) 758-3777.