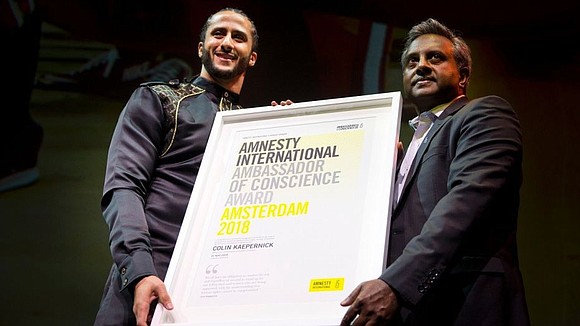 Former San Francisco 49ers quarterback Colin Kaepernick was honored in Amsterdam – the capital of Netherlands – over the weekend with Amnesty International’s Ambassador of Conscience Award. Presented by former teammate Eric Reid, the award went to the former NFL star for his kneeling during the National Anthem, which started a trend among NFL players in protest of police violence against people of color. Most sports pundits believe Kaepernick’s action cost him his NFL career, as no other team has picked up the former Super Bowl quarterback since. Kaepernick was born to a white mother who had an affair with a Black man. He was put up for adoption and raised by a white family in Wisconsin. During his acceptance speech, Kaepernick referred to the “unlawful” killings of people of color by law enforcement as “legal lynching.” Said Kaepernick, “Racialized oppression and dehumanization is woven into the very fabric of our nation – the effects of which can be seen in the lawful lynching of Black and Brown people by the police, and the mass incarceration of Black and Brown lives in the prison industrial complex.”