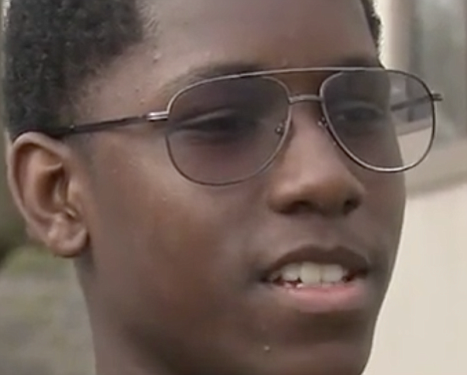 Brennan Walker, 14, of Rochester Hills, Michigan, woke up around 7:30 a.m. on Thursday — too late. He had slept through his alarm and was going to miss the school bus, reports the New York Times. So he decided to walk to Rochester High School, where he is a freshman. That takes about an hour and a half, but he thought he would at least make it in time for his third-period class in world studies, his favorite subject. Brennan did not have his smartphone that morning, and so, lacking assistance from GPS, he tried to follow the route his bus usually takes. He ended up in a quiet subdivision where the roads looped into each other, and when he noticed he had gone in a circle, he stopped to ask for help. He tried one home, and then another. A woman answered the door, he said, and began yelling almost immediately, as if he were trying to break into her house. “She didn’t really give me a chance to speak a lot, and I was trying to tell her that I go to Rochester High and I was looking for directions,” Brennan said on Friday. “A few moments later the guy came downstairs, and he grabbed the shotgun.” Brennan ran. The man followed briefly, walking out of his house and stepping off his porch, according to home security camera footage reviewed by the authorities. He fired a single shot with a 12-gauge shotgun, but Brennan was not hit. The teenager kept running. A few minutes later he encountered deputies — the woman at the home had called the authorities — and told his story. “It’s disgusting, it’s disturbing and it’s unacceptable on every level,” Sheriff Michael Bouchard of Oakland County said. On Friday, the man, Jeffery Zeigler, 53, was charged with assault with intent to murder and possession of a firearm in the commission of a felony, the authorities said. The security footage suggested that Zeigler was “not terribly weapons-competent,” Sheriff Bouchard added. “He was slower to discharge the weapon and as a result, allowed this young man, thankfully, to get farther away.” The episode involving Brennan, who is Black, called to mind instances in which Black people have been killed by armed civilians or the police in recent years, like Stephon Clark, 22, who was fatally shot last month in Sacramento by police. The incident set off widespread protests. Brennan’s story is similar to that of Renisha McBride, 19, who went up to a stranger’s house in a suburb of Detroit and shot and killed in 2013. Brennan’s mother, Lisa Wright, said she considered Rochester Hills, a Detroit suburb, a safe community but was only half-surprised that her son was threatened. “As a Black person, I know it’s a possibility,” she said. Mrs. Wright was mindful of what has happened to other Black teenagers, such as Trayvon Martin, the unarmed 17-year-old in Florida who was killed while wearing a hooded sweatshirt by a neighborhood watch volunteer. She said she had already had the talk with her son about all of the extra things he might have to do to keep himself safe: Don’t wear hoodies. Be open and approachable. Take your hands out of your pockets. She added that in the security footage she had seen, her son appeared to be doing everything right on Thursday morning. “I just remember a huge shotgun being pointed and aimed at my son,” she said. “My son was running away.” Zeigler, a retired firefighter, told a District Court judge on Friday that he was in bed on Thursday morning when his wife began “screaming and crying,” according to the Associated Press. “There’s a lot more to the story than what’s being told,” he added, “and I believe that will come out in court.”