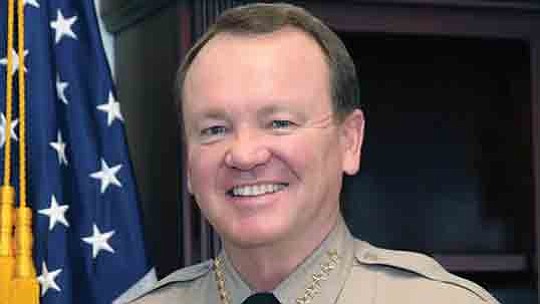 The Los Angeles County Sheriff’s Department is running a projected $40 million budget deficit and using dollars allocated for services, supplies and equipment to pay out an estimated $142 million in unbudgeted overtime, according to a report presented this week to the Board of Supervisors.

Chief Executive Officer Sachi Hamai told the board that the numbers reflect a historical imbalance in place for the last 20 years, long before Sheriff Jim McDonnell was elected in 2014.

“The sheriff’s budget does not reflect the actual spending in many of the line item categories,’’ Hamai said, pointing to $260 million in overtime spending, more than double the amount budgeted.

The department says it uses overtime to make up for hundreds of vacant sworn and civilian positions.

In response, the board unanimously voted to hire an independent consultant to develop strategies to recruit and retain more deputies.

The department is also struggling to absorb cost increases in retiree health care and workers’ compensation, with Hamai projecting $100 million in cost overruns.

McDonnell pledged to collaborate with Hamai and the auditor-controller on a sustainable budget, but he also raised “the very real possibility that the LASD is underfunded.’’

Pressures include an “exponential rise’’ in the jail population and a growing number of mentally ill inmates requiring additional services, and the sheriff suggested that the scope of the department’s work might need to be cut back to right-size the organization.

“We want to be many things to all people, but we need to ask ourselves if can we afford to do that,’’ McDonnell said. He later added, “We have reached a fiscal tipping point.’’ The sheriff said the organization—which has a $3.2 billion budget for fiscal year 2017-18—is among the leanest when compared with law enforcement agencies in New York, Chicago and other big cities, which have an officer-to-population ratio of 4 to 1,000 or more, versus the LASD ratio of one to 1,000.

“Los Angeles taxpayers are getting a true bargain,’’ McDonnell said.

The sheriff, the board, city officials and labor leaders all agreed that deputies are being asked to work too much overtime, which hurts morale and creates the risk of bad decisions.

The union believes another 1,500 deputies need to be hired, according to Derek Hsieh, executive director of the Association for Los Angeles Deputy Sheriffs.

Deputies are being asked to work as many as six to eight extra shifts a month, Hsieh said, which is just “not healthy.’’

Supervisor Kathryn Barger agreed, saying, “It is not fair to ask them to work large amounts of overtime’’ to make up for unfilled positions.

Significant mandatory overtime is one of the things that makes it hard to hire new deputies, Hsieh said. The personnel shortage also hamstrings the department from instituting changes—including adding more mental health evaluation teams and upgrading equipment and technology—a point echoed by McDonnell, who cited an “already archaic information infrastructure.’’

Supervisor Hilda Solis noted that difficulties in hiring enough officers is “not unique to this department, but part of a national trend,’’ and urged McDonnell to “focus on quality.’’

McDonnell said the department has been searching college campuses and military bases nationwide to find the best recruits, in addition to boosting its social media presence to attract interest.

Keeping deputies from leaving the department is also critical, the sheriff said, telling the board he worries that “deputies are chronically tired’’ and spending too much time away from their families, especially since many have long commutes to work.

“We cannot achieve full staffing and reduce overtime just by increasing the number of people coming through the front door,’’ McDonnell said.

A report from the recruiting and retention consultant to be hired by the CEO’s office is expected back in 90 days.

Hamai pledged to work with the auditor-controller and sheriff’s department to bring the budget into balance by June 30.

The CEO said the collaborative review would include an analysis of whether the overtime costs are directly tied to vacancies and an effort to match ongoing revenues to ongoing expenses.