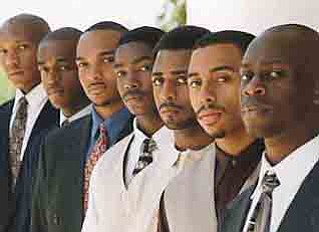 Based on the astonishing financial success of megastars like Jay Z, LeBron James, Tyler Perry, Kevin Hart and others, there's reason to believe that African American men have finally turned a long-awaited corner economically.

But recent studies confirm that despite healthy generational increases in wealth among high-earning Black men, the majority will likely grapple with "persistent poverty" throughout most of their lives, a finding contrary to the popular belief that it has been steadily narrowing.

A new extensive study conducted by The Equality of Opportunity Project, analyzed racial differences in economic opportunity using data on 20 million children and their parents across generations, shedding light on a stark reality that African Americans have always known to be true, that race, and racism have always been determining factors in how opportunity is distributed in America, reports Black Enterprise.

Findings in the study reveal that Black boys, even those reared in wealthy families and residing in the most well-to-do neighborhoods, have always earned less than their white counterparts in adulthood. To put it simply, the study indicated that Black boys have always had much lower rates of upward mobility than White children, which has contributed to generations of Black-White income disparity. In fact, by some measures, the research showed there has been no change in the income gap between African-American and white males over the last 70 years.

A study authored by University of Chicago economist Kerwin Kofi Charles and Duke University economist Patrick Bayer is the first to look at income inequality while incorporating data from men who aren’t working. The method, said Charles, is a more accurate picture of labor market dynamics because it addresses access -- or lack thereof -- to jobs. While some men might not be working by choice, many simply can’t find a job or are kept out of the workforce by jail or their criminal record.

Charles attributes at least some of this lack of progress to an educational attainment gap. While ending segregation and the Civil Rights Movement led to better education for Blacks as a group, African-Americans are still playing catchup compared with whites as a whole. Meanwhile, the educational requirements for a decent middle-class job keep getting higher.

Research shows that Black men experience the most severe underrepresentation in the field of “construction, extraction, and maintenance,” which tends to be low-education-credentialed but which pays wages that are significantly higher than in the service sector. Black men are overrepresented in the lower-paying service sector.

Another example of this occupational segregation can be found in upper management. Black men are “very underrepresented” as chief executives and legislators, although they tend to be “at least proportionally represented in a variety of managerial-type occupations.”

Are limited resources a factor?

One of the prominent reasons given for income disparity among Blacks and Whites is the difference in the neighborhoods they grow up in. However, disparities persist even among Black and White children who grow up on the same block.

Differences in neighborhood-level resources, such as the quality of schools, cannot explain the inter-generational gaps between Black and White boys by themselves. Studies have even compared data from some of the best metro areas for economic mobility for low-income Black boys to ones for low-income White boys. They found that Black-White disparities exist in virtually all areas and neighborhoods.

When researchers compared outcomes for Black and White men who grew up in similar households with both parents and similar levels of income, wealth and education, they found that Black men still had substantially lower incomes in adulthood. Their conclusion was that “family characteristics play a limited role in explaining the gap.”

And growing up in a high-income family provides no cushion from these disparities either. The study found that black children with rich parents are almost as likely to fall back into poverty as they are to remain rich. By contrast, white children born to wealthy parents are five times more likely to stay there.

While the odds remain somewhat bleak for African American males collectively, high-earners have made great strides in closing the income gap with their white counterparts over the decades. As for the others, only time will tell.