Billboard from Black artist may go back up 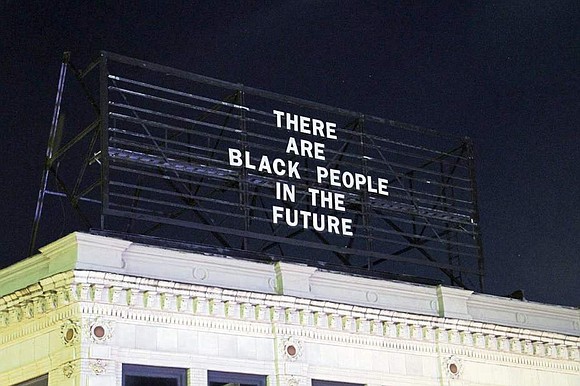 Yesterday we told you about a billboard in Pittsburgh that was taken down because the landlord reportedly deemed it offensive. The billboard simply read “There are Black people in the future.” Today, there are indications from the landlord, reports the Pittsburgh Post Gazette, that the billboard may go back up. “Over the last 24 hours, we’ve received a number of emails from people who said they are not offended by the sign and are saddened by its removal,” reads the statement from Eve Picker, whose company manages the property at Highland and Baum in the East Liberty area. “They far outnumber the people who originally approached us about being offended. We truly appreciate the comments from people who reached out to us in a respectful, thoughtful manner and believe the public has spoken. We are giving the tenant full approval to reinstate the original sign. In the future, we will follow the approval process outlined in the lease the tenant signed, so that we are all informed and on board for all future signs.” The billboard was part of “The Last Billboard” art project, a creation of Carnegie Mellon associate professor Jon Rubin, who specializes in contextual art. For the last eight years, it has broadcast various messages and currently rotates monthly, spotlighting a different artist each month. “There Are Black People in the Future,” which was posted March 3 and removed last week, was the work of local artist Alisha Wormsley, building on her ongoing project of the same name. In a statement released Wednesday, Profesor Rubin decried the billboard’s removal, especially given its location. “I find it tragically ironic, given East Liberty’s history and recent gentrification, that a text by an African American artist affirming a place in the future for Black people is seen as unacceptable in the present,” he said. Picker’s sent a message to Rubin on Wednesday, in which she said that her inbox was being flooded by people accusing her of being a racist. “So here we are,” she wrote. “Art has caused friction. Perhaps that’s what you wanted but it shouldn’t be aimed at me.”