‘The Work’ puts prison inmates, outsiders on an equal footing 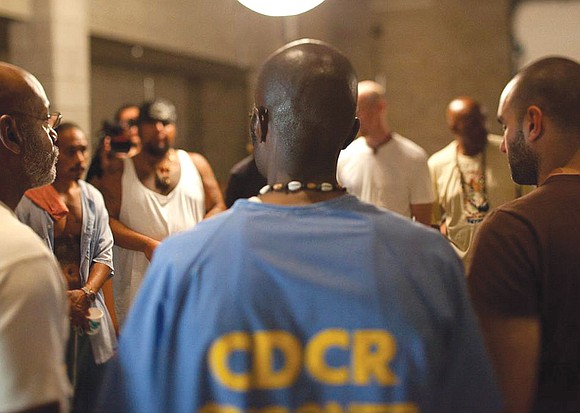 Prison outreach programs are nothing new. While most are faith-based, other more secular groups occasionally set up programs for the betterment of those incarcerated. Presumably, this is done with rehabilitation as the end goal. The best known of these is chronicled in the 1978 Academy Award-winning documentary “Scared Straight!”

Another reform group established a decade earlier at the California Medical Facility at Vacaville, just east of the Bay Area, was initiated improve the educational levels of the inmates there. Called the Black Cultural Association, it eventually segued into the left-wing Symbionese Liberation Army, embroiled in the Patty Hearst kidnapping.

Further north at the historic Folsom State Prison near Sacramento, a four-day group therapy session is held for inmates and the outside public twice a year. A documentary from this year’s South by Southwest (SXSW) Culture Festival, captures these proceedings in the finished project titled “The Work.”

Director Jairus McLeary was drawn into the production by his father, James McLeary, a clinician and head of “The Inside Circle Foundation,” the nonprofit overseeing the film.

The filmmakers track the “volunteers,” a non-descript group from various walks of life as they file into the prison under the appraising eyes of the convicts. One in particular, a teaching assistant named Brian, catches their eye as “a live wire.” As the session unfolds, it becomes clear that these visitors will benefit more from these interactions then the convicts they seek to help.

“They think they’re going to be a facilitator, but they’re actually being facilitated,” notes an attendee.

Prison serves as an ideal place to cultivate the ability to judge human nature, as its necessary for survival, notes Eldra “Vegas” Jackson, a former “Blood” gang member. Along with members of The Aryan Brotherhood, Crips, Native Americans, and Hispanics, he serves as a guide or seer for these outsiders as they confront the preconceptions of masculinity, and the facades crafted to mask the underlying problems from which conflict is sprung.

Jackson acknowledges the self-deceit that set him on his own journey of misdirection.

“For a large part of my life,” he confesses, “I was a reactionary.”

By “reactionary,” he means his behavior was set on automatic pilot, i.e., any provocations directed his way triggered reflex driven responses, with little or no forethought. Jackson had been molested as a child by a babysitter, setting the course for his subsequent misbehavior. A gifted athlete, for a time he channeled this anger into sports, egged on by the applause his performances generated. Still, his compulsion for delinquency continued, resulting in the inevitable consequences.

Previously, he was able to hide his shortcomings via exertion on the courts and playing fields. When that was taken away (due to his misbehavior), he resorted to the façade of gangbanging.

With this background and his experience going through the group process and doing “the work” himself, Jackson easily sees through Brian’s feeble attempts to hide his own low self-esteem and feelings of inadequacy.

“The Work” is not pleasant to watch. The men wrestling through the process undergo real pain as they face up to tragedies from their past, often requiring physical restraint from their peers.

“It looks like its anger, but it’s (actually) grieving,” Jackson observes.

The film closes with a claim that all inmates going through the program and released from prison have reoffended. Jackson has now spent three years of emancipation, and continues to act as a facilitator to spread the knowledge gained through his therapeutic process.

“The Work,” (89 minutes), is fresh off award-winning appearances at The Sheffield Film Festival and SXSW, and has already been released in the United Kingdom. It is scheduled for an Oct. 25 release in the United States.