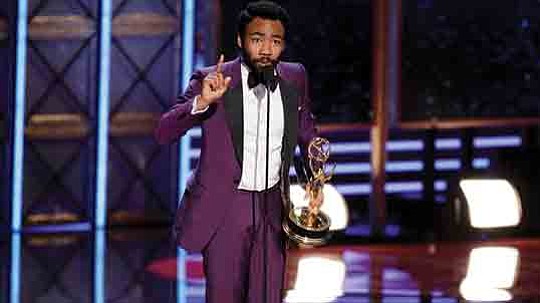 The 2017, 69th annual Emmy Awards may have had the lowest ratings in their televised history, but it didn't stop the production from making history.

Lena Waithe, is the first Black female to win an Emmy in the category of writing for a comedy series. Donald Glover is the first Black man to win an Emmy for directing a comedy series. Coupled with the fact that Glover also won an Emmy for Best Leading Actor in a Comedy, he became only the second Black man to be awarded in that category in some 30 years. And Sterling K. Brown is only the second Black actor to win the Outstanding Lead Actor in a Drama Series category in almost 20 years.

Waithe took home an Emmy for co-writing the “Thanksgiving” episode of “Master of None,” along with series creator and star Aziz Ansari.

“Master of None” tells the story of a 30-year-old actor in New York named Dev (Aziz Ansari). The Netflix production delves into his personal and professional life. Lena Waithe co-stars in the series as his friend Denise.

In her acceptance speech, Waithe joyfully said, “I see each and every one of you. The things that make us different, those are our superpowers. Every day when you walk out the door and put on your imaginary cape and go out there and conquer the world because the world would not be as beautiful as it is if we weren't in it,” she said. “And for everybody out there that showed so much love for this episode, thank you for embracing a little Indian boy from South Carolina and a little queer Black girl from the South Side of Chicago. We appreciate it more than you could ever know.”

Glover made “double” history. He walked away with two Emmy awards for FX’s “Atlanta.” He is the first African American to win an Emmy for directing a comedy series. And he walked away with an Emmy for Outstanding Lead Actor in a Comedy Series, which a person of color hasn’t won in more than 30 years. Actor Robert Guillaume’s 1985 win for his portrayal of the titular Benson DuBois in the ABC sitcom “Benson” takes that honor.

FX's “Atlanta” centers on a pair of cousins who strive to make it in the Atlanta rap industry.

The 33-year-old actor, writer, director and musician won two Golden Globes for creating and starring in the show “Atlanta” earlier this year. “I want to thank the great algorithm that put us all here,” Glover told the Emmy crowd during his speech Sunday. “I want to thank my parents who are in the audience,” he added. “This is nuts.”

Sterling K. Brown is the first Black actor to win the Outstanding Lead Actor in a Drama Series category in almost 20 years. In NBC’s “This is Us,” Brown stars as Randall Pearson, the adopted son of an all-American family, who quests after his biological father. No Black performer has accomplished this feat since “Brooklyn Nine-Nine” star and Emmy favorite Andre Braugher's 1998 win for “Homicide: Life on the Street”—a fact that the actor called out in his speech. “Nineteen years ago, Detective Frank Pembleton held this joint, as impeccably played by Andre Braugher,” the actor said. “I just want to say that whether it's at Stanford University or on this stage, it's my supreme honor to follow in your footsteps.”

This is Brown's second Emmy. He won an Emmy last year in the Outstanding Supporting Actor In A Limited Series category for his portrayal as Christopher Darden in FX's “The People v. O.J. Simpson: American Crime Story.”

The 69th h Annual Emmy Awards presentation may not have been a ratings hit this year. But what this year's production provided the audience is the “stuff” Hollywood dreams are made of. And the Emmy Awards will continue to reflect that magic.