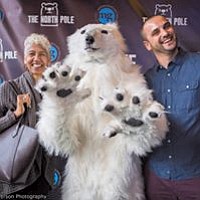 Gentrification and progressive politics collide in the new web-based comedy, “The North Pole,” on view at http://www.thenorthpoleshow.com.

“The North Pole” is the story of Benny, Marcus, and Nina, three life-long friends and native residents of north Oakland, known to its inhabitants as the title of the show (aka “Ice City”). They in turn refer to each other as “polar bears,” a term coined by community organizer, rapper, and unofficial “mayor of Oakland,” Mistah FAB.

Their existence is threatened by the invasion of moneyed young professionals moving into their 'hood, driving up the rent and replacing their cultural uniqueness with condos, exorbitant rents, and trendy (high-priced) retail outlets.

Heading the cast is Oakland native Reyna Amaya (Nina), whose portrayal is a composite of people she knew growing up. Nina, a school teacher, is the leader of the trio which knows that steps must be taken to address this yuppie invasion, but is unsure of the direction in which to go.

Amaya spent her childhood summers at her grandmother’s home in the New York borough of Brooklyn’s Prospect Park, a place transformed over the years by gentrification. A comedian and writer, she has honed her performing skills since attending a summer circus camp, Winnarainbow, established by counterculture hippie legend Wavy Gravy as a child.

Donte Clark, who plays Marcus, is an activist and poet best known as the focal point of “Romero is Bleeding,” a documentary about his efforts to mount a contemporary version of Shakespeare's “Romeo and Juliet” to address youth violence in his hometown of Richmond, Ca.

He describes Marcus as a street-wise hustler who sees the influx of cash flush capitalism as an opportunity to better his lot through his graphic design skills. Fortune appears in the form of an affluent new roommate, Fin (played by actor/poet/writer Eli Marienthal) with ties to a startup corporation that manufactures artificial trees.

As the web series progresses, Marcus becomes conflicted over his instinct for financial stability and loyalty to the community.

Santiago Rosas is Benny, the manager at a local car wash. Engrossed in the community theater enclave around Phoenix, Ariz. during his youth, Benny's consciousness was enhanced by classes in social justice at Arizona State. Taking the plunge to embrace his dramatic leanings, he moves to San Francisco to enroll in classes in the (Sanford) Meisner Technique to acting. He supports his craft working at a bank in the city's Mission District, which informs his awareness of the sway of gentrification.

“Every character you play is already inside you,” he explains.

For Benny, he constructs a persona that is the bedrock of any community. Benny can always find you a cheap mechanic to fix your car, get tickets for a concert or sporting event, or anything you need. Benny's ready humor may be a mask to cover his anger about what's going on in his neighborhood, and its impact on his future living situation.

Serving as show runner is writer/producer Josh Healey, whose westward migration from his native Washington, D.C., to the University of Wisconsin, and finally Oakland, has given him a continental perspective on gentrification.

“The line of race and racism run through every town in this country,” he notes.

“You just gotta know who to ask.”

A resident now for 10 years, Healey is a member of the nonprofit Movement generation (http://movementgeneration.org/), which produced

“The North Pole.” He hopes the series will be a conduit to use art, culture, and humor to further the discussion about social and political issues.

For more information on this ground breaking show, visit: https://www.facebook.com/TheNorthPoleShow.