“Who are Venus and Serena Williams” 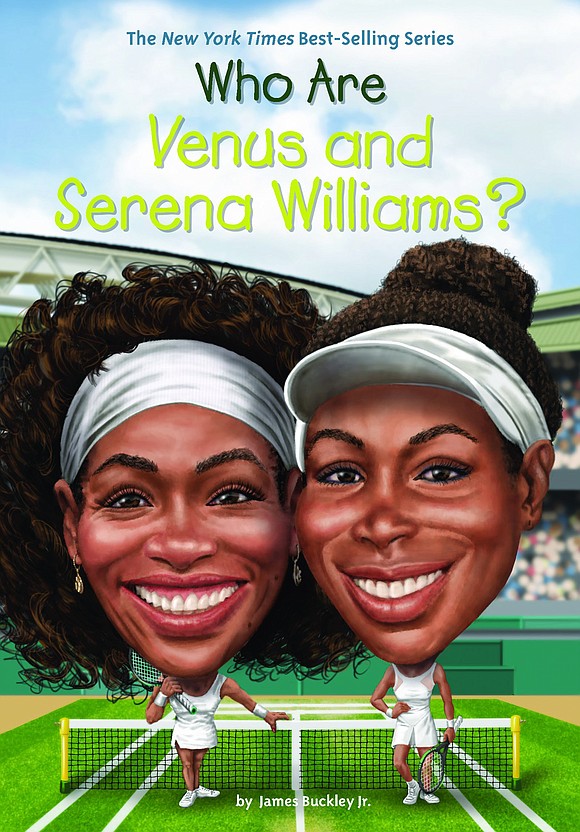 “You kids quiet down!”

If you’re feeling wild, you’ve no doubt heard that, or PIPE DOWN, or KNOCK IT OFF, or something similar, for sure. You’re a kid, kids make noise, and in the new book “Who are Venus and Serena Williams?” by James Buckley Jr., you’ll read about two girls who were encouraged to make a lot of “racquet!”

Nearly 40 years ago, Richard Williams met Oracene Price, and they got married. Oracene had three daughters, Richard had six children, but there’s always room for more: in 1980, Venus Ebony Starr was born, followed by Serena Jameka a little more than a year later. The family lived in Michigan then; they moved to California when the girls were small.

It was there, in Compton, where Richard got a great idea.

He’d been watching tennis, and he knew his girls could become stars. His stepdaughters really weren’t interested, but four-year-old Venus absolutely loved smacking tennis balls over the net. Serena learned to love it a year later, and their father proceeded to teach his girls “everything he knew about tennis.”

Their lessons weren’t held in the best tennis court, though. The court surface was cracked and weeds were growing through it. The net was tattered and it was all located in a dangerous neighborhood. Still, it was where Venus and Serena could practice all they wanted and soon, even local gang members recognized the girls’ talent.

By age eleven, Venus won sixty-three of her seventy-two matches in junior level; she went pro three years later. When Serena was eleven years old, she racked up wins in forty-six of forty-nine matches in junior level; she turned pro at age fifteen. The adult tennis world took notice of the girls, and not just because they were African Americans in a mostly-white sport. Serena and Venus were mad talented, too!

Yes, it was true that the girls’ father had “pushed their careers forward.” It was he who encouraged them to practice and play, but the girls “did the difficult work on the court.” And by the time they were in their mid-teens, “The Williams sisters were ready to take the professional tennis world by storm.”

At some point in the next few months, there’s a good possibility that your child will need to read a biography. So why not make it one that inspires – like “Who Are Venus and Serena Williams?”

You might think that everybody knows all about these two talented women, but author James Buckley Jr. gives the story a more kid-friendly take here, with anecdotes that will delight young readers. Astute kids may notice the story wanders now and then – the sport can overshadow the biography – but Buckley pulls the focus back soon enough, giving kids an all-around look at sisters who’ve ensured “The world of professional tennis will never be the same…”

Meant for 8-to-12-year-olds, this book could also work to supplement the knowledge of a slightly older student who needs it. For them, “Who are Venus and Serena Williams?” will have them making noise.