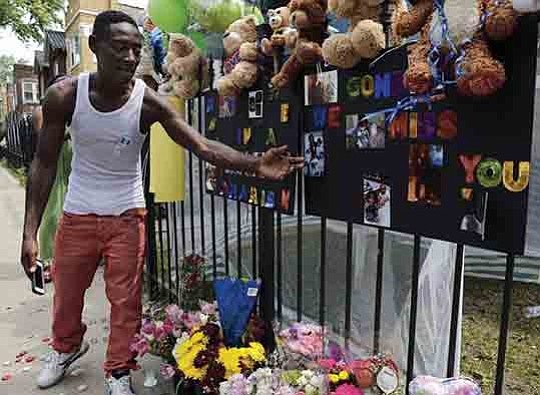 This is more than a stale one-liner that you might hear at the end of a didactic Clint Eastwood film.

These words encapsulate a lifestyle, and for many, a birthright.

A recent investigation by ProPublica highlights a study of hospital patients in inner-city communities in Atlanta that revealed rates of Post Traumatic Stress Disorder (PTSD) symptoms comparable to those seen in veterans of the Vietnam, Afghanistan and Iraq wars.

At least one in three respondents reported that at some point in their lives they had experienced PTSD symptoms - an array of stress responses including flashbacks, persistent feelings of fear or shame, a sense of alienation and aggressive behavior. (The nationwide PTSD rate is about 7 to 8 percent, with generally higher rates among Blacks and women.)

“The gun epidemic is the leading cause of death of young African American men, more than the next nine causes put together,” she said.

Data from the Centers for Disease Control and Prevention confirms her assertion: Of all Black males between the ages of 15 and 24 years that died in 2014, a majority - 54 percent - were killed by a gun.

Nearly nine in 10 gunshot deaths among young Black men were homicides. When young White men die from a gunshot wound, the cause is usually suicide.

Beyond the direct victims of shootings and assaults, those affected include the loved ones who often struggle to help family members cope with, for example, a spouse's debilitating panic attacks or a child's unrelenting nightmares. And they typically carry this weight within a landscape rife with poverty, often without a hospital, much less a psychiatrist's office, nearby.

The prevalence of these psychological ripple effects suggests that in some neighborhoods, nearly every family is touched by traumatic violence.

Among the most trauma-ridden neighborhoods are impoverished communities of color where inequality fuels hopelessness. That drives vulnerable youth deeper into violence, both as victims and as perpetrators. Studies on youth have traced PTSD symptoms back to forms of violence - from street shootings and police chases to sexual assault - that have become routine in rough city neighborhoods.

Some experts say that the high victimization rate of young Black men is under-covered because most Americans think that gun violence doesn't affect their lives. Michael Nutter, a former Philadelphia mayor and now an urban policy professor at Columbia University, told The New York Times in 2015 that the public would care more if Whites were dying from gun violence at the same rate as Blacks.

“The general view is it's one bad Black guy who has shot another bad Black guy,” Nutter said. “And so, one less person to worry about.”

The violence is pronounced in urban areas. In Chicago, for example, the risk of getting shot in the most dangerous neighborhood is nine times greater than in the safest neighborhood, and the shootings are clustered in districts that are populated predominantly by low-income Black people.