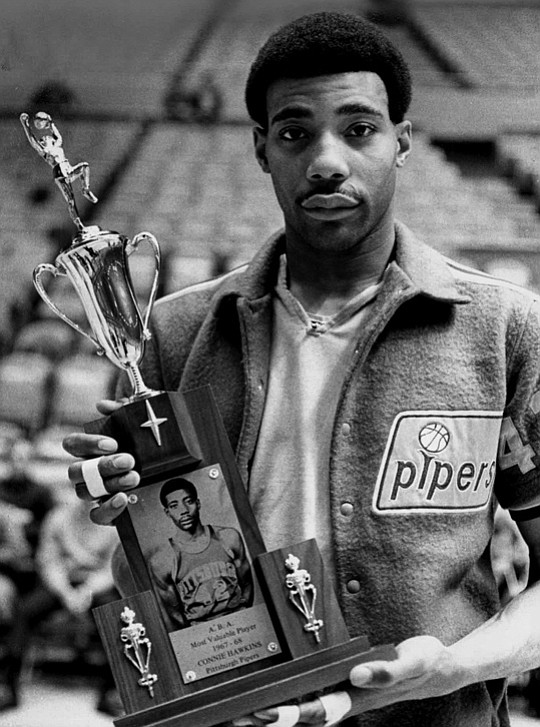 "...the only damaging statements about his involvement were made by Hawkins himself—as a terrified, semi‐literate teenager who thought he'd go to jail unless he said what the D.A.'s detectives pressed him to say." -from a 1969 Life Magazine article by David Wolfe

The unique milieu of the five boroughs that comprise New York City nurture individuality and creativity, traits that arguably find their greatest athletic expression in the game of basketball.

One of the shining lights of this hoops Mecca, a man instrumental in the transformation of the ground-based game of the 1940s and 50s into the aerial, theatrical acrobatics played in contemporary arenas, passed away on Oct. 6. Cornelius Lance Hawkins, better known as Connie, or “the Hawk,” died of undisclosed causes at age 75.

Hawkins became a legend as a teenager on the playgrounds of Bedford–Stuyvesant, and the fabled Rucker Park Tournament before leading his Boys High School team to two straight undefeated seasons. Named a 1960 Basketball All-American, he accepted a scholarship to the University of Iowa, where he continued his athletic prowess coupled with lackluster academic performance in the classroom.

His collegiate career was curtailed when he was implicated in an NCAA investigation involving gambling and point shaving. Although he was never indicted, or even directly linked to the illegalities, the scandal caused the revocation of his scholarship, and his being blacklisted from the NBA. For nearly a decade he became a basketball gypsy, playing for the likes of the American Basketball League (which lasted less than two seasons) and the Harlem Globetrotters before getting a reprieve with the establishment of a brash start up called the American Basketball Association.

Taking its cue from the American Football League and its impetuous quarterback, Joe Namath, the ABA was tailor-made for Hawkins’ crowd-pleasing style of play. Noted for its neon red, white, and blue ball, huge Afros (and handlebar mustaches on its White players), and the implementation of the three-point shot, the ABA captured the public psyche with its persona as “the outlaw league.”

Hawkins led the transition league above the rim, with high flyers like Julius “Doctor J” Erving, George “Iceman” Gervin, and David “Skywalker” Thompson, making the ABA economically viable, and clearing the path for its merger with the established NBA.

Meanwhile, Hawkins was vindicated for the indignity of his adolescence through the efforts of journalist David Wolfe, who chronicled his “guilt by association” in a 1969 LIFE Magazine article, and later in book form with “Foul!” published in 1972.

Further exoneration was granted in 1969, with his lawsuit against the NBA was settled for $1 million, and his selection by the Phoenix Suns to the Holy Grail of the hardwood, the NBA.

The 27-year-old rookie made the best of the situation by hunkering down to average 24 points and 10 rebounds a game to earn All-NBA First Team honors for 1970. A high point of his tenure with the Suns came when the team came within one playoff game of knocking off a Los Angeles Lakers squad that went on to win the 1972 NBA championship.

Hawkins was able to play professionally for seven years, including stints with the Lakers and the Atlanta Hawks until 1976, when knee issues forced him into retirement.

His ultimate redemption came with his 1992 induction into the Hall of Fame.