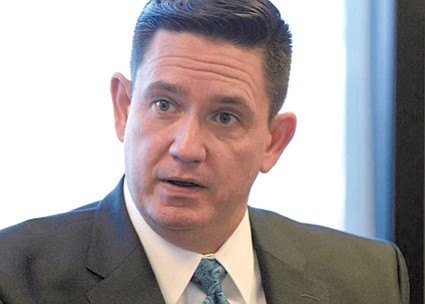 The Board of Supervisors voted this week to formally appoint a new director to run Los Angeles County’s child welfare agency.

Bobby Cagle, the director of the Georgia Division of Family and Children Services, will take office Dec. 1.

Cagle was among two finalists considered by the board during a closed door meeting Sept. 18.

Cagle has more than 27 years of public sector experience and has run Georgia’s child services department since being appointed by Gov. Nathan Deal in June 2014. He was responsible for a $1.6 billion budget and more than 7,700 employees, according to county Chief Executive Officer Sachi Hamai.

Cagle will have his work cut out in running the troubled child welfare agency, which has struggled with heavy social worker caseloads and high—profile child deaths in cases of abuse previously reported to DCFS.

The agency is also fighting an uphill battle trying to grow its pool of adoptive and foster parents. However, these problems aren’t new to Cagle, who took over the Georgia division at a difficult time.

“Days into the job, he had to answer tough questions about the death of 5—year—old Heaven Woods, who had an open case with DFCS,” the Atlanta Journal—Constitution reported. “As facts of the death emerged, agency workers in the case were taken off duty and child advocates called the tragedy a textbook example of ineffective casework.”

Heaven died after being savagely beaten, and had been abused for weeks. Her mother and mother’s live—in boyfriend pleaded guilty to murder.

The case echoed that of 8—year—old Gabriel Fernandez, a Palmdale boy beaten to death in 2013, allegedly by his mother’s boyfriend, Isauro Aguirre. He and the boy’s mother, Pearl Fernandez, are facing murder charges.

Four Los Angeles county social workers and supervisors were dismissed due to their alleged mismanagement of Fernandez’ case and are awaiting trial on criminal child abuse charges.

In addition to hiring 600 new child welfare workers, Cagle increased frontline workers pay by 19 percent, according to the newspaper.

That represents a big compensation bump for Cagle, according to public records. His 2016 salary was $162,000, according to the online records website Open Georgia, which lists data compiled, but not vouched for, by the state’s audit department.

However, the Los Angeles County salary is in line with that paid to previous director Philip Browning, who retired in January, leaving Brandon Nichols as acting director.

Before his current job with DFCS, Cagle served for three and a half years as a commissioner for the Georgia Department of Early Care and Learning.

A graduate of the University of North Carolina at Chapel Hill, Cagle also has a Masters in social work from that university.

Cagle began his post—graduate career handling child welfare cases. Then he spent eight years as a probation officer and manager for the state’s Department of Corrections and Division of Community Corrections, respectively, before taking his first post at DFCS, according to his LinkedIn profile.