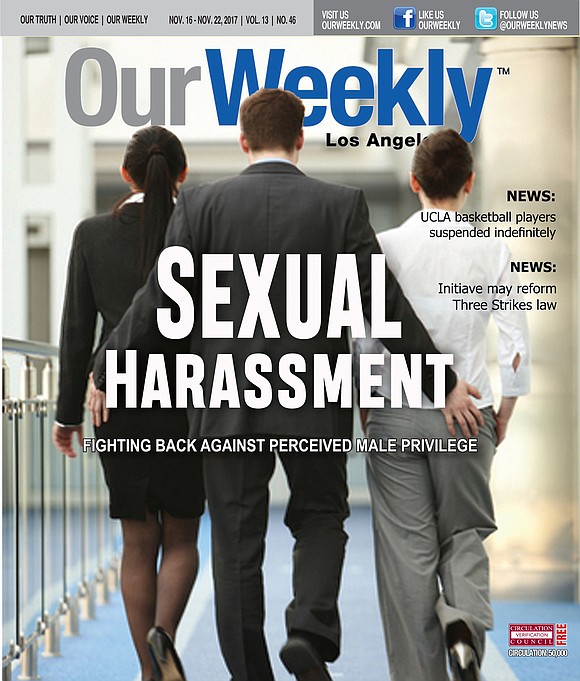 From Hollywood to the nation’s capitol and virtually all points between, allegations of sexual harassment against some of the most famous and influential persons have captivated public attention for the past three months.

The list grows each day in exposing how powerful celebrities and politicians have used their positions to curry sexual favors from primarily younger, impressionable men and women who feared their professional success may be derailed if they dare speak to these incidents.

The story may have began outright two years when dozens of women accused comedian Bill Cosby of drugging and then forcing himself upon them while they were in a vulnerable state. Then the floodgates seemingly opened this summer when producer Harvey Weinstein was accused of sexual assault and harassment. Since then, more than 60 women have come forth to accuse the disgraced filmmaker of sexual impropriety.

The incidents of sexual abuse in Hollywood are not confined to adults. Former child star Cory Feldman hinted during an October interview on the “Dr. Oz Show” that the former owner of Hollywood underage club—the “soda pop club”—popular among top teen stars of the 1980s including Drew Berrymore, Ricky Schroder and Alyssa Milano, was notorious for pedophiles who would regularly ply the teens with alcohol and drugs and try to lure them into sexual encounters.

Last year, the late Roger Ailes of Fox News as well as host Bill O’Reilly signed off on multi-million-dollar settlements with former Fox news anchors and employees. Former Fox News host Gretchen Carlson claimed she was fired for rejecting Ailes’ sexual advances. Megan Kelly, now with NBC News, leveled similar claims of harassment against Ailes. Former Fox news anchor Lis Wiehl settled a sexual harassment case against O’Reilly for a reported $32 million. This case does not include a reported $13 million paid out by O’Reilly and Fox News to another five female employees in exchange for their silence.

Even former President George H.W. Bush is not immune as allegations have surfaced that he inappropriately touched some young women decades ago. Former President Bill Clinton had to weather a similar storm during his 1992 election campaign, only to have such charges resurface six years later leading to his impeachment.

During his confirmation hearing in 1991, Supreme Court Justice Clarence Thomas had to mount a vigorous defense against sexual harassment charges brought forth by law professor Anita Hill. And, of course, President Donald Trump was caught on audio tape during the 2016 campaign joking about grabbing young, desirable women “...by the psy.”

Alabama Judge Roy Moore, now seeking election to the United States Senate, is embroiled in a sexual harassment scandal so scurrilous that some Republicans on Capitol Hill are requesting that he drop out of the race.

Allegations of sexual harassment on Capitol Hill include a senior Senate staff member being accused of trying to open a junior aide’s wrap dress at a bar. A former congressional aide said a congressman grabbed her backside. A district worker said a House member told her to twirl in a dress for him in order to gain a promotion and/or salary increase.

The situation is so serious that the Committee on House Administration convened a meeting this week on sexual harassment in Congress. So far, about 1,500 former Capitol Hill aides have signed an open letter to House and Senate leaders to demand that Congress put in place mandatory sexual harassment training.

Many of these accusations go back decades. Others are more recent. In Weinstein’s case, in the late 1980s an aspiring actress named Lisa Rose was visiting him in a hotel room when he requested she give him a message and disrobed in front of her. A few years later, Weinstein allegedly summoned actress Kate Beckinsale, then 17, to his hotel room while wearing only a bathrobe. After the string of accusations were leveled against Weinstein, Beckensale said, “A few years later he asked me if he had tried anything with me in that first meeting. I realized he couldn’t remember if he had assaulted me or not.”

Weinstein allegedly made a sexual advance toward actress Gwyneth Paltrow in 1994. After actor Brad Pitt, Paltrow’s boyfriend at the time, confronted Weinstein, the producer allegedly warned her to stay quiet about the encounter. Actress Heather Graham said Weinstein offered her a movie role in 2000 on the condition that she have sex with him.

The instance where Weinstein’s not-so-secret life was exposed was 20 years ago when actress Ashley Judd said he invited her to the Peninsula Beverly Hills hotel for what she thought would be a breakfast meeting. Instead, she was sent to his room only to find him in a bathrobe offering to give her a message. Judd said he subsequently asked if she’d like to watch him take a shower.

Women working on Capitol Hill say elevators are often the place where staff and members target females. They say they have been advised to stop riding along with men if possible, CNN said. One Senate aide described Capitol Hill as “sort of old school, Wild West workplace culture that has a lot of ‘work hard, play hard’ ethos and without the sort of standard professionalism that you find in more traditional workplaces.”

Another former House aide told CNN that with so many women working on Capitol Hill, many of the men “have no self control.”

Terana Burke and #Me Too

Some of the women interviewed by CNN specifically cited a Texas congressman for inappropriate behavior, while more than a half dozen named a California congressman for pursuing women staffers.

Last weekend, the original creator of the #MeToo Campaign, Terana Burke, led more than 1,000 women in a march and rally through the streets of Hollywood for survivors of sexual harassment, sexual assault and sexual abuse. A full 10 years prior to these allegations of celebrity sexual harassment, Burke was helping young Black women talk about sexual assault. She co-founded Just Be Inc where she heard reports of sexual violence and offered counseling to young survivors—specifically empathy—because she was a victim of sexual assault Burke said she started the #Me Too campaign to spread the message that women who have endured this type of treatment are not only “heard,” but “understood.”

“For every Harvey Weinstein, there a hundred more men in the neighborhood who are doing the exact same thing,” Burke told the crowd. “The conversation around harassment in Hollywood will broaden to include other industries if we force it to. We are more than just a hashtag. We are women with dignity and we will not be silenced.”