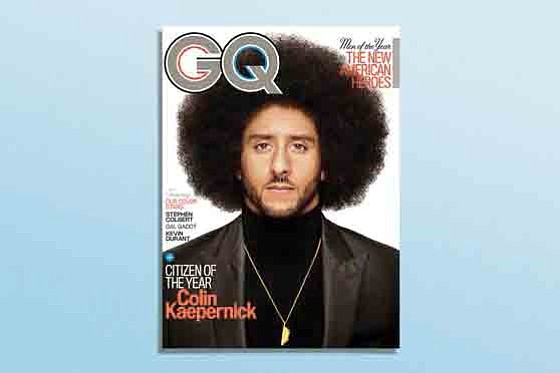 Former San Francisco 49ers quarterback Colin Kaepernick, a controversial figure who started a movement to kneel during the national anthem before NFL games as a protest against racial inequality, has been named Citizen of the Year by GQ magazine. The men’s magazine named its Men of the Year on Monday morning and the magazine released the cover featuring the four new “American heroes,” including Kaepernick, late night host Stephen Colbert, NBA star Kevin Durant and actress Gal Gadot. Kaepernick tweeted Monday: “I'm honored to be recognized by @GQMagazine as Citizen of the Year.” GQ published a feature story titled “Colin Kaepernick Will Not Be Silenced” about the still-unsigned free agent quarterback, who was not quoted in the article. Describing Kaepernick, the editors of GQ wrote: “He's been vilified by millions and locked out of the NFL -- all because he took a knee to protest police brutality. But Colin Kaepernick’s determined stand puts him in rare company in sports history: Muhammad Alo, Jackie Robineson – athletes who risked everything to make a difference. Kaepernick filed a grievance under the collective bargaining agreement against the NFL last month, accusing all 32 owners of collusion against signing him to an NFL contract. The 30-year-old Kaepernick previously said his agent reached out to all NFL teams to make sure they were aware of his interest in playing this season. He opted out of his contract with the 49ers in March. NFL commissioner Roger Goodell stated on multiple occasions this season that Kaepernick is not being blackballed. NFL owners and executives have been scrambling this season to determine the best response to players kneeling during the national anthem. NFL players who have demonstrated have said they are protesting racial inequality, but not the flag or the anthem itself. Kaepernick first sat and then knelt during the anthem before games with the 49ers in the 2016 season as a protest to denounce police brutality against African-Americans, social injustice and racial inequality. In the GQ article, editors wrote that Kaepernick agreed to participate in its project because “he wants to reclaim the narrative of his protest.” GQ also published multiple recent photos of Kaepernick posing with people from Harlem.